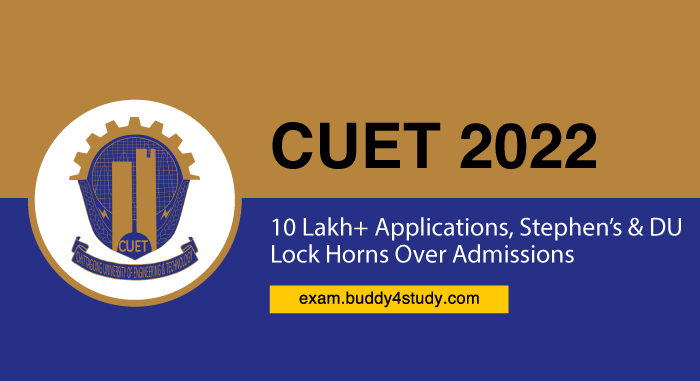 New Delhi, 31 May 2022 – The application process for the CUET 2022 exam is now over and over 10 lakh applications have been received through the process. Due to this, each seat in central universities like University of Delhi, Jamia Millia Islamia, among others, has nearly 500-1000 applicants vying for admission. For example, for every seat in BSc Biotechnology at Jamia, there are over 1000 applications. At Ambedkar University, there are 910 aspirants for each BBA seat. At JNU, four of the 10 BA (Hons) courses have nearly 310 applications per seat.

At DU, which has around 6 lakh of applicants out of the nearly 10 lakh applications, there are approximately 557 applications per seat in BA (Hons) courses.

Regarding the issue, a senior DU official noted that “One of the reasons is that since the Class 12 board marks are not the basis of admission, candidates still have a great chance to crack CUET and secure a seat. Earlier, many bright students who scored in the 80s would not apply, knowing they could not meet the cutoffs.”

After St. Stephen’s released its prospectus for the 2022-23 session depicting that it will only give 85% weightage to CUET UG 2022 instead of the mandated 100%, Delhi University has asked the college to withdraw its prospectus and issue a public notice declaring revised admission procedures in line with the new admission policy of the university. DU added that “any admission done in violation of its norms and policies will be treated as null and void ab initio”.

In regards to the issue, St. Stephen’s College announced that it will conduct an interview for all applicants who have been shortlisted from the CUET list and the admissions will be based on 85% weightage to the CUET score and 15% to the interview. The college called its admission process “time-tested, proven and guaranteed through a landmark judgment delivered by the highest court of the land.”

In response to this, the Registrar of Delhi University – Vikas Gupta – wrote to the college, “You would appreciate that adding a score based on interview to the score which has already been obtained through a standardised statistically robust procedure would introduce subjectivity in the admission process and eventually lead to discrimination, which is not desirable.”

He further added that “the university shall not be liable for any consequential impact on the life and career of the applicants admitted to the college in violation of the admission policy”.

To read about the CUET PG exam, please click here.

Why is St. Stephen’s College not following DU’s mandate of 100% weightage to CUET?

The St. Stephen’s College is bent on following its original process of 15% weightage to interviews. Thus, it is not following DU’s mandate.

How has DU reacted to the issue?

DU has specified that CUET will be given 100% weightage in admissions. Any admission in violation of this policy will be deemed null and void.

How many applications have been received through CUET?