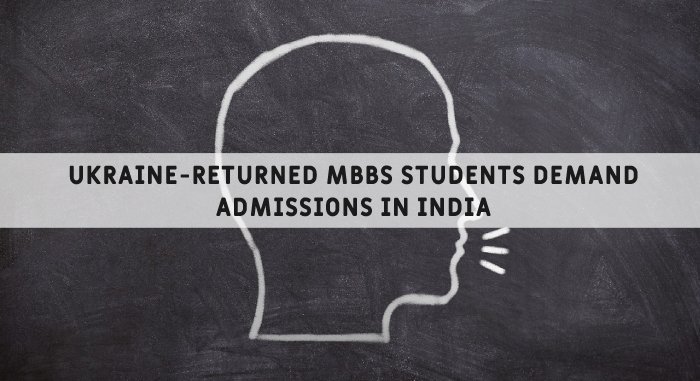 New Delhi, 18 April 2022 – On 16 April, nearly 100 MBBS students from Odisha – who have returned from the war-torn nation of Ukraine – met the Union Education Minister Dharmendra Pradhan in Delhi and submitted a memorandum seeking admission into medical colleges in India. The students stated that they have been facing issues getting admission in India since their return. As they face an uncertain educational future, they requested the minister to provide them admission in MBBS courses in Indian institutions.

In another development, a large number of students who have returned from Ukraine gathered at Jantar Mantar (Delhi) along with their parents on April 17 and demanded the government to provide them with admissions in medical courses in India so that they can complete their education.

Nearly 100 students from Odisha met the Union Minister during his visit to New Delhi on Saturday. These students submitted a memorandum that requested the minister to solve their admission transfer issues and enable them to get admitted into medical colleges of India.

Although the governments of other European countries have now allowed Indian students to continue their medical education, the students noted that medical fees and costs of living in countries like Poland, Romania, Hungary, and Czech Republic are more than double of that in Ukraine. They also noted that the quality of medical education in Kazakhstan and Kyrgyzstan is not good and that they cannot afford the medical fees as they have already spent a lot of money in Ukraine.

Why are Ukraine-returned students demanding admission in India?

The students are demanding admission in India as they were unable to complete their MBBS in Ukraine due to the ongoing war between Russia and Ukraine.

Why is the government not offering the students direct admission in Indian medical colleges?

What actions are being taken to take care of the education of Ukraine-returned students?

As per the latest reports, several European countries like Poland, Romania, and Kazakhstan have now agreed to allow students to pursue medicine in their colleges until the situation stabilizes in Ukraine.