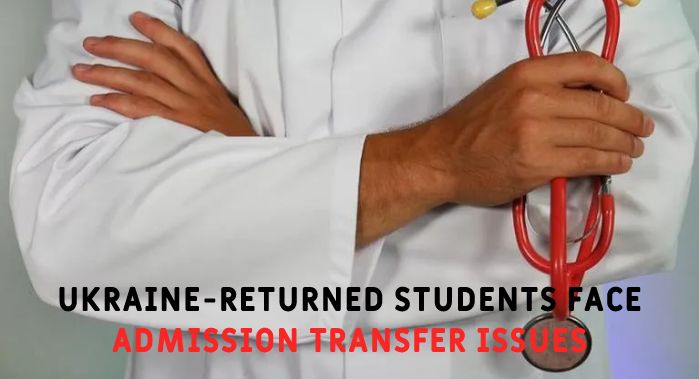 New Delhi, 10 March 2022 – Indian students returning from Ukraine due to the war now face an uncertain educational future in India. The major problem these students face is that they want to get admission in Indian medical colleges, which most government authorities have declined, citing that it might decrease the entry standards of medical colleges in the country.

In recent developments, the government of Maharashtra is looking into the logistics of offering online classes to the students. Similarly, Karnataka has also started brainstorming how to offer online education to students who have returned from Ukraine. Other state governments are also following suit and contemplating on how they can tackle the issue.

The Ministry of Health and the National Medical Commission (NMC) has recently relaxed the internship criteria for Ukrainian students. Due to this, the students can now complete their internships in India.

Note: The students still need to appear for – and crack – the Foreign Medical Graduate exam to get a practitioner license.

The Punjab State Medical and Dental Teachers Association (PSMDTA) has decided to formally object to any move of the Centre (or the National Medical Commission) to accommodate Ukraine-returned students in government medical colleges in the state. The association believes that providing these students with direct admissions can affect the meritorious students who have already taken admission in government colleges of India.

PSMDTA’s President – Dr Diwan Singh Bhullar – noted, “At a meeting of the association, it was decided that students who have returned from Ukraine should not be given admission in government colleges. The Centre should chalk out a plan for them. But we will oppose any move to accommodate the students who have returned from Ukraine in government medical colleges, as by this move meritorious students already admitted in these institutes will get affected.’’

Maharashtra to Allow Students to Appear for NEET