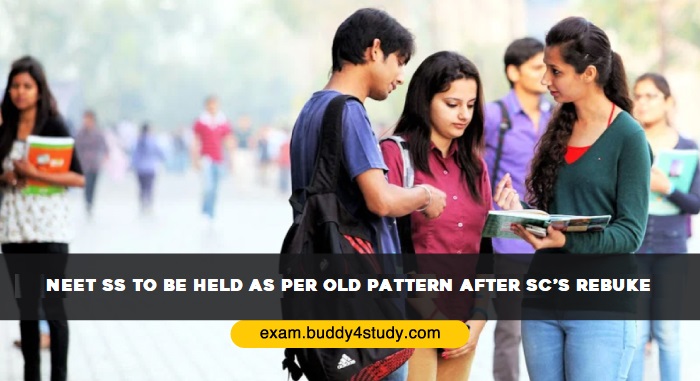 New Delhi, 7 October 2021: The central government has decided to conduct the NEET-SS 2021 (NEET-Super Speciality) examination as per the existing pattern. The recently-introduced changes in the exam pattern of NEET-SS will now be implemented from the next academic year i.e 2022-23. The move to postpone the changes in NEET SS has come after the Supreme Court slammed the Centre for introducing last-minute changes to the NEET SS exam pattern 2021.

The Centre has subsequently also postponed the NEET-SS 2021 examination by two months. The exam will now be held on 10-11 January. The NEET SS 2021 exam was earlier scheduled to be conducted on 13 and 14 November, 2021.

Before this decision was made, the top court was in the process of hearing a batch of pleas of 41 post-graduate doctors and others who had challenged the last-minute changes made to the syllabus after the notification was issued on July 23 for the test to be held on November 13 and 14.

In the revised attempt, the NEET-SS seeks to assess the candidate’s competence in his/her broad speciality and not in a super speciality. Therefore, the revised scheme has not mandated the applicant candidates to study something different from what they have not studied earlier.