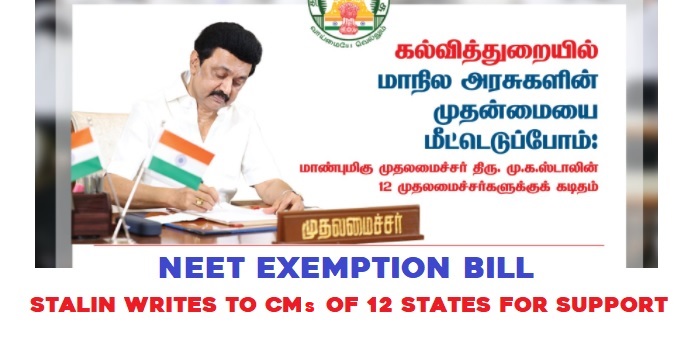 New Delhi, 06 October 2021 – As NEET opposition continues to heat up in Tamil Nadu, CM M.K. Stalin maintains a firm resolve to go forward with NEET abolishment across the state and establish Class 12 marks as the medical entrance criteria. To this objective, Stalin has written to chief ministers of 11 non-BJP states along with Goa, stating, “Our considered position has always been that the move by the Union government to introduce NEET goes against the spirit of federalism and violates the constitutional balance of power by curbing the rights of the state governments to decide on the method of admission in the medical institutions founded, established and run by them...”

The letter, dated October 1, was addressed to the chief ministers of Andhra Pradesh, Chhattisgarh, Delhi, Rajasthan, Kerala, Jharkhand, Punjab, Maharashtra, Odisha, Telangana, West Bengal, and Goa. In his appeal, the chief minister wrote, “We need to put up a united effort to restore the primacy of state governments in administering the education sector, as envisaged in our constitution.”

The whole issue erupted when a 19-year-old NEET aspirant, Dhanush, committed suicide due to the fear of not passing the exam. To date, 16 youngsters in Tamil Nadu have ended their lives from fears of not qualifying the exam. In response to these tragic losses, CM Stalin passed a bill on 14th September 2021, which sought to abolish NEET altogether and replace class 12 marks as the benchmark for admissions in undergraduate medical courses. While passing the bill, the chief minister noted, “NEET is not a qualifying exam and this is being exposed by scams such as the sale of question papers, impersonation of students and frauds by coaching centres. Our government is working to ensure that NEET, which is destroying social justice in education, is removed…”

The bill is still pending for approval from the president. The letter written by Stalin aims to persuade other states to join the resistance against NEET. This is done to strengthen the possibility of getting the President’s final approval over the bill and to do away with NEET all over the country.