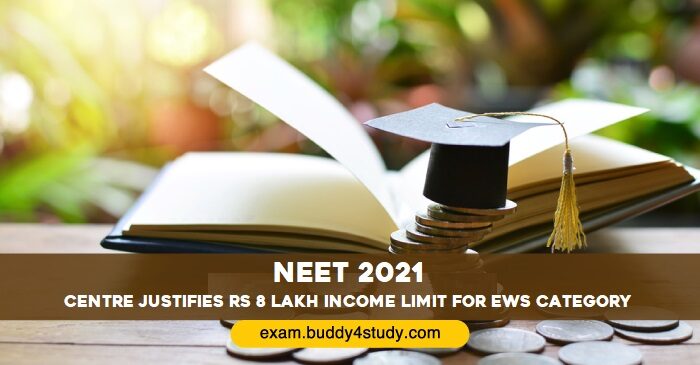 New Delhi, 28 October, 2021: On Tuesday, the Centre justified its decision of fixing the limit of INR 8 lakh annual income for determining the Economically Weaker Sections (EWS) category for reservation in NEET admissions before the Supreme Court. In an affidavit filed by the Ministry of Social Justice and Empowerment before the court, the central government mentioned that the logic behind fixing the concerned amount is justified and is in line with Articles 14, 15, and 16 of the Constitution.

NEET 2021 Reservation: Reasons Given By The Centre

On October 21, the Supreme Court had asked the Centre whether it would like to revisit the limit of INR 8 lakh annual income, fixed for determining the EWS category for reservation in NEET admissions. In response to SC’s queries, the Centre came up with certain references to support its decision.

Here are the three in-depth reasons the central government gave in support of the EWS reservation criteria:

1. On the basis of economic standing

The centre explained that the mechanism that has been followed to determine the creamy layer for the purpose of OBC reservation would be equally applicable for the determination of the EWS category. The rationale behind this argument lies in the fundamental premise as follows: if a person/his family have a substantial economic standing, he/she may not require the benefits of reservation at the cost of others.

2. On the basis of the ‘Major General Sinho Commission Report’

a) The Centre referred to Major General Sinho Commission’s suggestion regarding the extension of the existing criteria. As per the existing criteria, the identification of the ‘creamy layer’ among OBCs acts as a valid basis to decide the upper limit for identifying Economically Backward Class (EBC) families among the General Category.

b) The Commission recommended that Below Poverty Line (BPL) families belonging to the General category, whose annual family income from all sources is below the taxable limit (as may be revised from time to time), may be identified as Economically Backward Classes (EBCs).

Note: The Major Gen (retd) SR Sinho Commission was constituted by the UPA Government in 2010 and it recommended welfare measures for the EWS category. Although the Sinho Commission Report is one of the aspects that has been taken into consideration by the Centre, fixing the income criteria for the EWS category has not been solely made on the basis of the commission’s report.

The Centre mentioned that in the year 2016, the upper income limit for the determination of the ‘Creamy Layer’ in respect to OBCs was INR 6 lakhs per annum. To maintain the same, it was increased to INR 8 lakhs on the basis of the Consumer Price Index (CPI). As the CPI had increased from 197 (December, 2011) to 268 (March, 2016), the multiplier became 1.36. Therefore, to maintain the same standard of living, the income limit of Rs 6 lakh was multiplied with 1.36 to make it 8.16 lakhs (rounded off to Rs 8 lakhs). As such an exercise had already been taken into consideration, the Government of India decided to adhere to the same financial model.

In line with the above-mentioned justifications, the Centre further mentioned to the Supreme Court that the counselling process of NEET-PG 2021 will not begin until and unless the court decides the challenge to 27% reservation for OBC and 10% for EWS category in PG All India Quota (AIQ) seats (MBBS/BDS and MD/MS/MDS) for the present academic session.