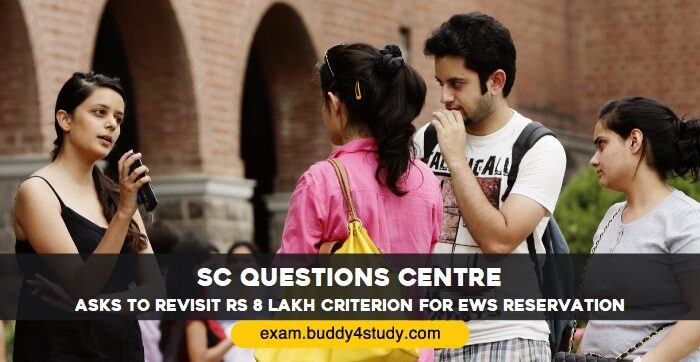 New Delhi, 22 October 2021 – On Thursday (October 21), the Supreme Court (SC) asked the Centre whether it would like to revisit the criteria of INR 8 lakh as the annual income for determining the Economically Weaker Sections (EWS) category for reservation in NEET admissions. The court has clarified that it has no intention of going into the policy domain and it only wants to find out whether constitutional principles were taken into account while making this policy.

The court was vexed as no affidavits were filed by the Ministry of Social Justice & Empowerment and the Department of Personnel and Training (DOPT) regarding the move. Therefore, the SC has formulated questions to be answered by the Centre in a week. SC noted that it was ready to discharge its duties but it wanted to know the basis for fixing Rs 8 lakh as the limit of determining the EWS category. It also offered the option to pass a stay order on the government’s move of fixing INR 8 lakhs as the criterion. This was offered so that the Centre could file the required affidavits before the court and the proceeding can move forward with due diligence.

SC Questions and the Centre Answers

The questions put forth by the Supreme Court are:

*Major Gen (Retd) SR Sinho Commission was constituted by the UPA Government in 2010 and has recommended welfare measures for the EWS category.

The Centre gave the following responses to the above-mentioned queries:

SC Still Has Many Questions that Need to be Answered

The court has raised many other questions in this regard, which the Centre is expected to answer. Some of these questions are:

Note: SC has asked the Union Ministry of Social Justice and Empowerment and DOPT to file their replies to the above-mentioned questions by October 28.

For any other education-based news, please visit Buddy4Study