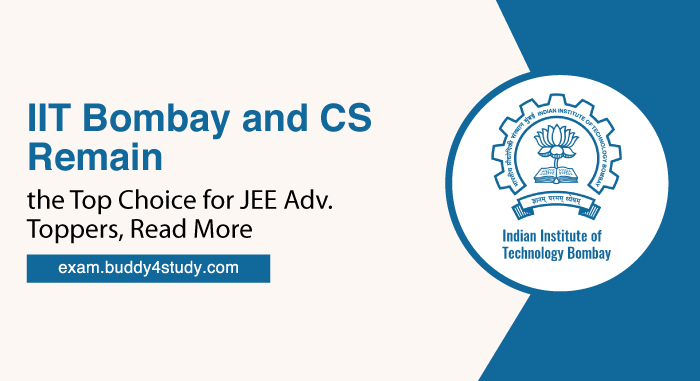 September 26, 2022, New Delhi, IIT Bombay and CS: Following previous years’ trends, 69 of the top 100 JEE-Advanced toppers have secured admission to the Indian Institute of Technology (IIT), Bombay. Out of these 69 students, 68 have chosen ‘Computer Science (CS) Engineering’, while only one candidate has chosen ‘Physics Engineering.’

According to the data from the Joint Seat Allocation Authority (JoSAA), IIT Bombay and CS have been the most sought-after institute and engineering branch, respectively. This year, IIT Bombay was the first choice of 93 top candidates, out of which 69 were selected in the first round of seat allocation for the IITs. IIT Delhi received admissions from 28 of the top 100 applicants, while IIT Madras admitted 3 of them.

Other than this, the top 500 JEE-Advanced toppers continue to choose IIT Bombay first.  IIT-Delhi accepted 127 of them, and 173 were accepted into IIT-Bombay. Less than 50 of the top 500 students secured admission to IIT-Madras, IIT-Kanpur, and IIT-Kharagpur.

Why do JEE Advanced toppers choose IIT Bombay over other IITs?

The JEE Advanced toppers mostly choose IIT Bombay over other IITs for many reasons. One of the reasons is that Mumbai is the financial capital of India, which attracts the highest number of employers to IIT Bombay compared to other IITs. The other reason is that IIT Bombay offers the most choices for courses, high pay packages, the flexibility of switching engineering branches, and its ‘Minors’ and ‘Honours System’ enable students to select as many courses as they want to take each semester.

What is the other name for IIT Bombay?

IIT Powai is another name for IIT Bombay. Mumbai’s IIT is situated in the Powai neighbourhood.

Which is the most sought-after engineering branch at IIT?

Computer Science Engineering (CSE) is the most sought-after engineering branch at IIT.