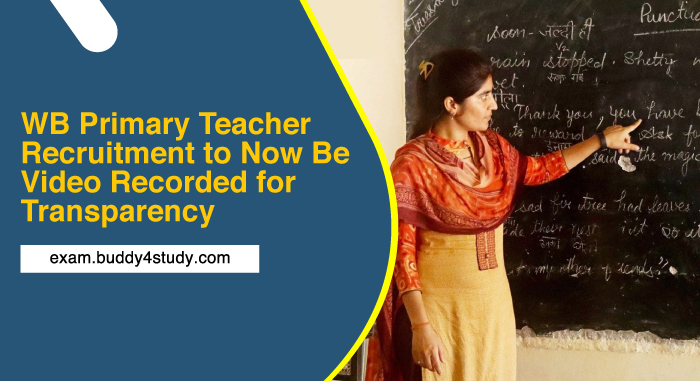 October 17, 2022, New Delhi, WB Primary Teacher Recruitment: The West Bengal Board of Primary and Education (WBBPE) has decided to make the West Bengal Primary Teacher Recruitment entirely transparent by video recording the whole selection process. This is because the state has already gone through several controversies regarding the recruitment of teachers at different levels, and wants to bring all these issues to a standstill by making the entire process crystal clear.

Sources from the WB State Education Department have mentioned that all three stages of the recruitment process – written examination, interview and counselling – will be video recorded for transparency.

The West Bengal Board of Primary Education (WBBPE) is the first autonomous body of teachers’ recruitment to advocate this monitoring system. The entire process is aimed at incorporating 100 per cent transparency in the process of recruitment and ensuring zero corruption at every level.

Internal sources also revealed that there is a possibility that the West Bengal School Service Commission (WBSSC) will also take similar initiatives to ensure more clarity in their recruitment processes.

What is the new WB Primary Teacher Recruitment process?

WBBPE has announced that it will be the first teachers recruitment body to promote transparency by allowing video recording of all the stages of the process – written test, interview and counselling.

How to apply for WB Primary Teacher Recruitment 2022?

The West Bengal Board of Primary Education (WBBPE) has started the registration process for the West Bengal Teacher Eligibility Test 2022 (WBTET 2022). Eligible and interested candidates can visit the official website – wbbpeonline.com.