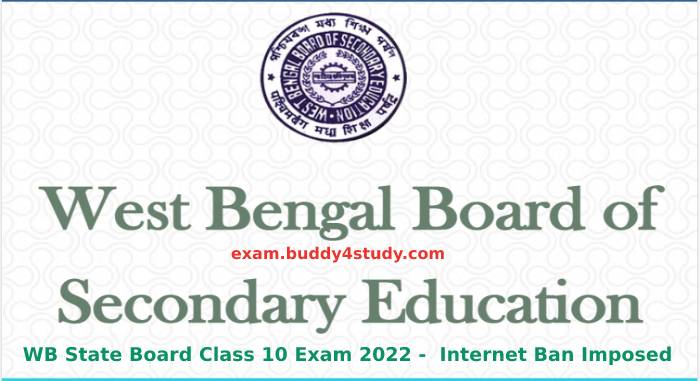 New Delhi, 07 March 2022: To discourage fraudulent activities during the ongoing Class 10 state board (Madhyamik) examination, the West Bengal government has decided to temporarily halt internet services in certain areas of the state for eight days. Various security measures have been put in place after considering the reports of alleged question paper leaks in the last two years via social media channels, which resurfaced recently.

WB Class 10 Board Exam 2022 – Why did West Bengal state board impose an internet ban?

Since 2019 and 2020, numerous reports have appeared concerning question paper leaks from certain examination centres from districts of Murshidabad and Malda within sixty minutes of commencement of the exam. Images of Bengali, Mathematics, English and Life Science question papers began circulating on WhatsApp in 2019. In 2020, the Bengali language Class 10 board exam question paper had been circulated on WhatsApp shortly after the exam began.

WB Class 10 Board Exam 2022 – For how long has the internet ban been imposed in West Bengal?

West Bengal Board of Senior Secondary Education (WBBSE) has ordered a directive that declared suspension of internet services in about seven districts of the state of West Bengal during the WBBSE 2022 Class 10 board examination. As per the order, the internet services shall remain suspended from 11 am onwards until 3.15 pm for a total of eight days, starting 7th March until 16th March 2022 in parts of Uttar Dinajpur, Murshidabad, Cooch Behar, Malda, Jalpaiguri, Darjeeling, and Birbhum.

WBBSE President Kalyanmoy Ganguly has maintained that security measures to prevent fraudulent activities during the state board examinations are in place. He also said that “the students will not be permitted to use the washroom for the initial 100 minutes of the WBBSE 2022 state board examination.” He further added that CCTV cameras would also be installed in various areas of the examination centres with four control rooms set in respective locations to ensure proper security.