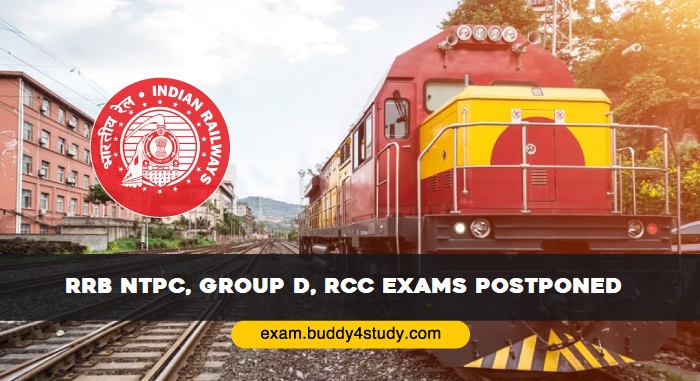 New Delhi, 1 June 2021 – Railway Recruitment Board (RRB) has officially announced that the RRB NTPC exam 2019, Group D, and RCC (Railway Recruitment Cell) exam have been put on hold due to various restrictions and lockdown imposed due to the second wave of COVID-19. 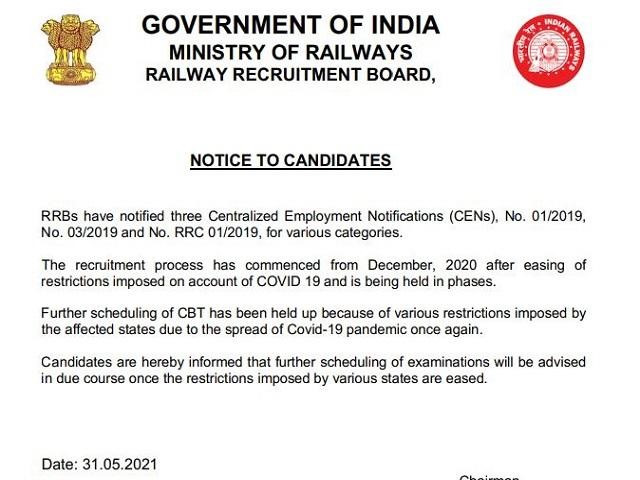 RRB Exams – New Dates to be Announced after Relaxation of Restrictions

An official notice regarding the same was issued on Monday i.e. 31 May 2021 on the official RRB website. As per the notice, the examination, which was scheduled to be held after RRB NTPC Sixth Phase in June 2021, has now been put on hold till further notice.

RRB has assured the applicants that they will announce the new examination dates in due course. The exam authority stated that the exam will be conducted when the situation gets normal or at least under control.

Only after the states relax the restrictions, which they have imposed due to the ongoing pandemic, will RRB release the further schedule of all the 3 examinations. Till then, candidates can visit the official website, www.rrbcdg.gov.in for the latest updates.

The notification for the exam of RRB NTPC (Advertisement no. – CEN 01/2019) was published for the recruitment of more than 35,000 posts. A total of 1 crore 26 lakh candidates had applied for these posts.

While it was initially supposed to be conducted in the year 2019, the RRB NTPC exam was postponed due to the first phase of COVID-19 and then conducted from 28th December 2020. The first phase of the exam ended on 13th January 2021. Later, the exam authority decided and implemented the examination in 6 phases. Around 6 lakh candidates had appeared in the sixth phase examination. Now, the candidates are waiting for the release of the seventh phase exam date.

RRB had scheduled the online exam for Ministerial & Isolated categories, against advertisement number 03/2019 from 15th December to 18th December 2020, after postponing the dates of the NTPC exam. RRB Group D Exam was also scheduled to be held in April and May 2021.

As the dates have been deferred now, candidates are requested to visit the official website of RRB and keep an eye on any updates regarding the new exam dates.