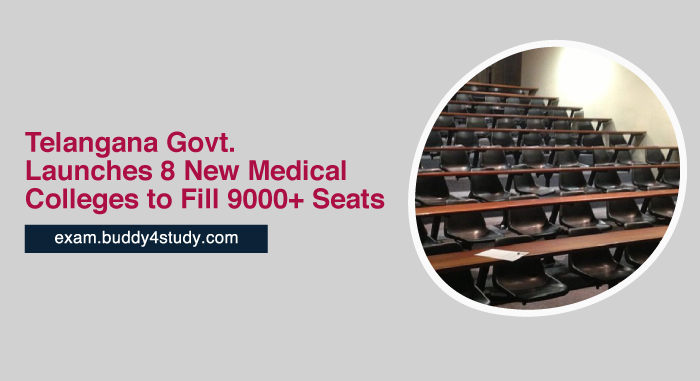 Till now, more than 1,150 first-year MBBS students started their medical study in the eight institutions located in the towns of Sangareddy, Mahabubabad, Mancherial, Jagtiyal, Vanaparthi, Kothagudem, Nagarkurnool, and Ramagundam on 15th November.

T Harish Rao, the Minister of Medical – Health and Finance Department of Telangana, said – “We will begin admissions in 8 new medical colleges this year, adding 1200 seats. Over 2,200 medical seats will be available this year, including the 1067 more MBBS seats.” He further stated that 85 percent reservation will be given to students who belong to the B category.

KCR, the chief minister of Telangana, remarked, “This is a wonderful chapter in the history of Telangana state.” There was a time when we had a lot of issues with drinking water, irrigation water, medical seats, and engineering seats. Introducing eight medical colleges today gives us great pride. The four medical colleges that we have previously established are located in Mahbubnagar, Siddipet, Nalgonda, and Suryapet. They are being successfully managed by us.”

The CM claimed that no one in the state had ever imagined that government colleges and medical colleges would ever be established in the tribal and remote areas of Telangana, especially in Mahabubabad and Vanaparthiand.

The CM while being interviewed also said that, since 2014, there are now twelve government medical colleges, and the total number of seats across all medical schools—public and private—has gone up from 2,800 to 6,500. He also stated that previously there were 850 MBBS seats in government medical colleges while now the total number of seats is 2,790. There used to be 531 PG seats, however there are currently 1,180 PG seats available. In fact the number of super speciality seats has also gone up from 70 to 152.

According to the Chief Minister, the Telangana administration wants to build medical schools in each of the state’s 33 districts. The state government did not seek any financial aid from the government for the establishment of these colleges.

KCR emphasized that the availability of paramedical workers in relation to the population is equally significant and that reflects the strength of the medical field. He claimed that in this direction, nursing colleges are also being developed.

1. How many new medical colleges have been opened in Telangana?

Ans. The Government of Telangana has launched 8 new medical colleges for the medical students.

2. When are the classes for the new medical colleges starting from?

Ans. The classes for these newly established 8 medical colleges have already started from Tuesday, November 16, 2022.

3. Which cities of Telangana got new medical colleges?

Ans. The new medical institutions are located in the towns of Sangareddy, Mahabubabad, Mancherial, Jagtiyal, Vanaparthi, Kothagudem, Nagarkurnool, and Ramagundam.