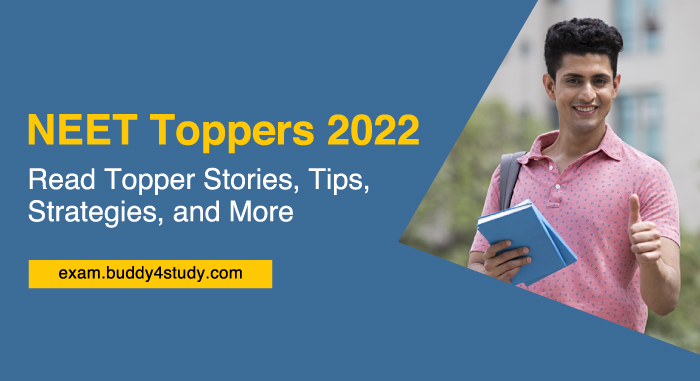 Tanishka Yadav, a student from Rajasthan, earned All India Rank 1 (AIR) in the NEET UG 2022 exam, ahead of Vatsa Ashish Batra, Hrishikesh Nagbhushan Gangule, and Richa Pawashe, respectively. These students are the first four NEET toppers 2022.

Tanishka’s outstanding performance in the medical entrance exam helped her secure the AIR 1 on the NEET toppers list 2022. She was able to achieve a score of 715 out of 720, or 99.99 percentile. Tanishka scored 99.96 percentile in Physics, 99.99 percentile in Chemistry, and 99.98 percentile in Biology, which included both Botany and Zoology subjects.

Tanishka Yadav is from Narnaul, Haryana, and she prepared for the NEET UG 2022 exam from Kota, Rajasthan. She is from a middle-class household where both her mother, Sarita Kumari, and her father, Krishna Kumar, are teachers in government schools. As part of her preparation strategy for the NEET UG, Tanishka relocated from her homeland of Haryana to Kota, Rajasthan, where she enrolled in a famous coaching programme. Tanishka describes her path to achievement as a turbulent ride with its own ups and downs.

Upon being asked about her preparation strategy, Tanishka said she prepared for NEET UG 2022 exam by devoting 6-7 hours per week to self-study in addition to coaching and classroom lessons. She further said that she never hesitated to ask questions until she grasped the concepts entirely.

When asked what her strategy for success was, Tanishka stated that medical students studying for the NEET exam should constantly ensure that they are familiar with the important ideas covered in the syllabus and that it was her inquisitive personality and habit of asking questions that enabled her to grab the AIR 1 and become the NEET topper.

Vatsa Ashish Batra achieved the All India Rank 2 (AIR 2) in NEET 2022 by scoring 715 out of 720. He hails from Delhi and is the son of civil servants Ashish and Monica Batra.

Although Vatsa and the top four rank holders all achieved 99.99 percentiles, it was the tie-breaker rule that decided the outcome. The Delhi boy scored the highest in this year’s medical admission exam despite getting the second rank. He sees being a doctor as an honourable profession and has always enjoyed medical subjects. Prior to attending Air Force Bal Bharati School in Delhi for his Class 12 education, the MBBS aspirant lived in Ranchi and completed his Class 10 education there. He had to relocate because of his parents’ work commitments in another location.

He had been preparing for the previous two and a half years in order to compete in the NEET exam. Upon being asked about his strategy and timetable, Vatsa said, “I followed very rotational timing throughout my preparation. The number of hours I put in for the NEET preparation each year varied. In Class 11, I did not study much for NEET. It was only in Class 12 that I gave a lot of time for the exam preparation. Apart from tuition, I used to self-study for 6 to 7 hours each day.”

Talking further about his preparation strategy, he added, “In the past few months, I increased my study time and took a mock test at least 4-5 times per week. In the last month, before appearing for the medical exam, I attempted 20-30 mock tests.”

In addition to this, he concentrated more on his teacher’s notes and mock tests than NCERT books. He claimed that during the exam, he focused on the biology section first, since he enjoyed it the most and knew he could do it more quickly and give himself more time for the other subjects.

Hrishikesh Nagbhushan Gangule has secured AIR 3 in the NEET 2022 exam by scoring 715 out of 720. Gangule is from Karnataka and both of his parents are software engineers. He was inspired to become a doctor by some of his distant cousins who are doctors. He decided to pursue the medical profession because, in his opinion, being a doctor is a noble profession that allows one to work for humanity. He has steadily worked toward his ambition of becoming a doctor since he was nine years old.

Upon being asked about his success mantra, he said that at first he was unsure about how to prepare for NEET 2022. Afterwards, he enrolled in a coaching programme while he was in Class 11, and it helped him grow more conscious about the preparation strategy. He then enrolled in their two-year academic programme.

He focused on consistent study and mastering the topics during the preparatory session. Gangule believes that clarity in basic concepts is a must and there should not be any kind of theoretical confusion.

Hrishikesh further added, “I knew I would get a good rank, but I didn’t expect that I would be among the highest marks scorers. It feels great and it is a relief as well. My approach has always been to daily focus on specific topics that I had planned to study, instead of studying for extremely long hours. My parents have been my biggest motivators who’ve taught me to learn from my mistakes and move forward.”

Rucha Pawashe secured the AIR 4 rank in the NEET 2022. She hails from Belagavi taluk in Karnataka. Rucha comes from a family of doctors. Her mother – Smitha – her father – Mohan – and older brother Prathamesh are all medical professionals. Also, both of Rucha’s great-grandfather and grandfather were doctors.

She has been preparing for the NEET exam for the past one year. She focused mostly on the previous year’s question papers and study materials. She wants to join the All India Institute of Medical Sciences (AIIMS).

Upon being asked to give some advice to future aspirants, she said, “Face the examination confidently; study the question paper and understand the patterns. Try to understand the concepts rather than learning them by rote, and face the examination without tension. There is no need to study 24 hours a day. You have to manage your time properly so that you don’t seem to waste time. Also, you have to spend quality time with your friends and family as that keeps you sane.”

Tanshika Yadav, who hails from Haryana, and has studied in Kota, Rajasthan secured AIR 1 in NEET 2022. Other than her,  Vatsa Ashish Batra, Hrishikesh Nagbhushan Gangule, and Richa Pawashe are also among the list of NEET toppers 2022.

Who is Tanishka Yadav?

When was the NEET UG 2022 result declared?

Where can one check the NEET 2022 result?

Candidates can check their results on neet.nta.nic.in and also on ntaresults.nic.in.