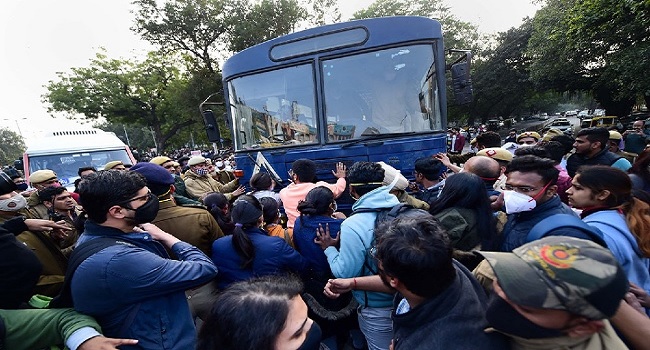 New Delhi, 29 December 2021 – The Federation of All India Medical Association (FAIMA) has called for a nationwide strike and complete withdrawal of healthcare services around the country after a doctor–police faceoff in Delhi, where doctors were allegedly “thrashed, dragged, and detained” by the Delhi Police. The nationwide doctor’s strike has begun today from 8 am onwards and will continue indefinitely until all their demands are met.

On Monday (27 December), a large number of resident doctors were protesting against the apparent delay in NEET counselling 2021. The protest was undertaken from Maulana Azad Medical College to the Supreme Court. However, the Delhi Police got into an altercation with the doctors, who claimed that they were adhering to all COVID-19 protocols and were protesting peacefully. After several doctors were allegedly beaten and abused by the Delhi Police, FAIMA called for a nationwide withdrawal of services.

Due to the alleged manhandling of resident doctors by the Delhi Police, FAIMA issued a statement calling for a complete withdrawal of healthcare services across the country (including Out Patient Department [OPD]).

Federation of All India Medical Association (FAIMA) calls for complete withdrawal from all healthcare services across the country from 8 am on December 29 “in protest against brute force by Delhi Police against doctors.” pic.twitter.com/lOPaGcx2oz

The doctor body noted, “This is to inform all that the medical fraternity stands absolutely shocked at the sheer display of unprovoked brute force by Delhi Police on our colleagues who have been peacefully protesting … lathi charge on our resident doctors and manhandling of many female residents by male police personnel during their peaceful demonstration is a pathetic display of the shameless attitude of the authorities.”

The Indian Medical Association (IMA), which has come out in favour of FORDA and FAIMA, asked for an apology from the Union Health Minister and urged the Prime Minister to intervene in the matter and resolve the issue.

The Delhi Police has denied all allegations of lathi charge or use of abusive language from their end and stated that 12 protesters were detained and released later.

In an official statement, Additional Deputy Commissioner of Police (Central) Rohit Meena said that “a group of resident doctors without having any authorised permission blocked the BSZ Marg and jammed the traffic for more than 6 hours. After requesting them to leave the road, they became aggressive and manhandled our personnel when efforts were made to detain them lawfully.”

An FIR has been registered against several doctors under relevant sections of the Indian Penal Code (IPC) for COVID violations, rioting, and damage to public property.

Note: On Tuesday (28 December), a meeting between the Federation of Resident Doctors’ Association (FORDA) and Union Health Minister Mansukh Mandaviya took place at Nirman Bhawan in New Delhi. However, the doctors’ body said that the “response was not satisfactory” and that the strike would go on as usual.