Home » NDA » NDA Nov 2021 – Cannot Postpone Admission of Women in the Armed Forces by a Year: SC to Centre 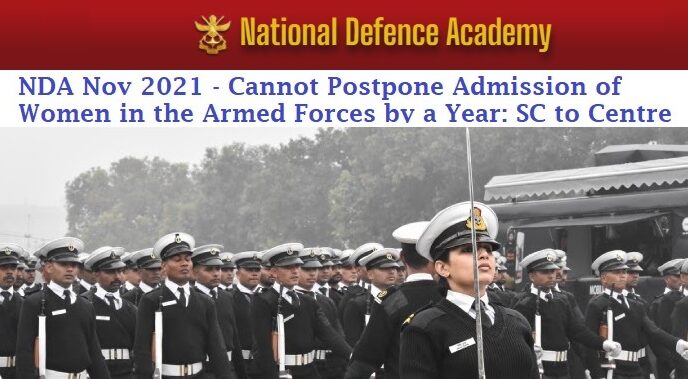 New Delhi, 22 September 2021: Rejecting the “no exam today, exam tomorrow approach”, the Supreme Court today asked the Centre to allow women candidates to appear for the National Defence Academy (NDA) exams in November this year. “Women must be allowed to take the November 2021 exams. Cannot defer for one year. Medical standards should be tentatively notified. UPSC to issue a corrected notification for the November exam,” the Supreme Court said.

The Supreme court further noted that it understands “the difficulty in putting in place infrastructure to induct female aspirants but the process cannot be postponed as will not send a good signal”.

Calling the present process of inducting women in the armed forces gender discriminatory, the Supreme Court, on August 18, directed that women could now sit for the upcoming NDA examination. The top court rejected the government’s argument that the restriction against women from training at the Pune-based NDA was a ‘policy decision’.

In response, the Union Government, on September 8, acknowledged that it had taken an in-principle decision to induct women cadets into the NDA, but asked for an exemption for this year’s admission, for which exams are to be held in November. In a hearing of the case, the Defence Ministry argued that it would need time till May 2022 to induct women in NDA owing to certain infrastructural and curriculum changes.

The government’s affidavit submitted before an apex court bench mentioned that a study group has been established by the defence services to formulate a holistic curriculum for women cadets at the joint defence service training institute of the Indian Armed Forces. “While medical standards for male candidates exist, appropriate medical standards for women candidates are also in the process of formulation,” it further said. The affidavit also highlighted that a team of senior officers has been summoned to give a comprehensive and futuristic proposal for training of women cadets at NDA.

However, rejecting the government’s request for delay in admissions to women candidates, the Supreme Court said, “If they (women candidates) appear in exams in May 2022 then the intake will take place in January 2023. We cannot delay things by a year.”

“The armed forces have dealt with very difficult situations and emergencies. They are trained in dealing with emergencies. And they will be able to deal with this,” the court added.