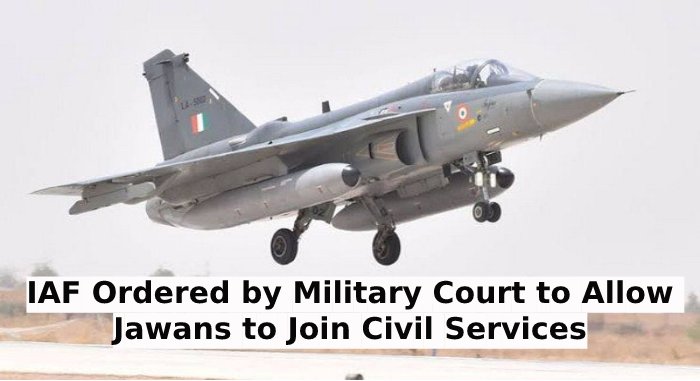 New Delhi, 29 March 2022: The military court has issued an order asking the Indian Air Force (IAF) to permit applicants who have qualified UPSC and state-level PSC examinations to join civil services without the requirement of an ‘A’ category grade skill.

In a recent incident, the Indian Air Force refused to allow jawans who had qualified for the Union Public Service Commission (UPSC) examination and State Civil Services examination, to quit the service and serve as Class I officers. After the jawans moved to military court, the Armed Forces Tribunal ordered the Indian Air Force to permit the jawan to join the civil services within two weeks.

Justice Rajendra Menon, Principal Bench of the Armed Forces Tribunal (AFT), told the Indian Air Force to make changes in its rules and regulations to permit jawans seeking to apply for grade ‘A’ services outside of the Air Force.

Final Order by the Military Court

In light of the recent arguments, the military court said, “we find adequate merit in both pleas and the same is therefore allowed, and we, therefore, allow the respondents to issue necessary ‘No Objection Certificates’ to both the applicants within two weeks since the date of the order”.

Are jawans allowed to apply for jobs in the civilian sector?

Yes, candidates can apply for jobs in the civilian sector but they must have qualified for either the UPSC or the state-level PSC examinations.

Can candidates apply without having prior approval from the IAF?

No, the candidates must seek prior permission from the IAF or a ‘No Objection Certificate’ from the same in order to apply for a civilian job.

Can a candidate still apply without an ‘A’ category grade skill?

Yes, a candidate may apply without an ‘A’ category grade skill but they must ensure that they have prior approval/NOC from the IAF.