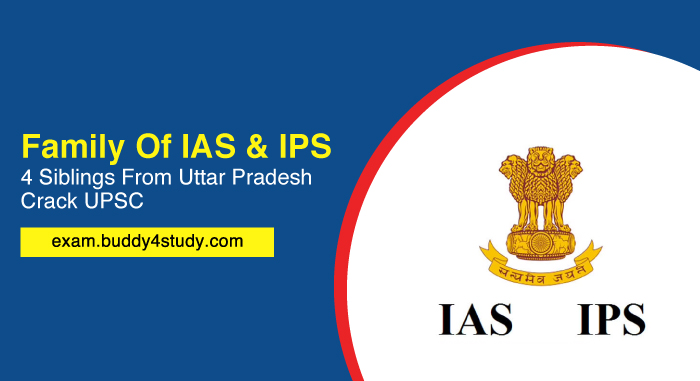 1 August, 2022, Uttar Pradesh: Two brothers and two sisters of the same family from the Lalganj town of Uttar Pradesh have cracked the Union Public Service Commission (UPSC) Civil Services exam. Now, all four of these siblings are posted as IAS and IPS officers in their respective cadres.

Their father, Anil Prakash Mishra, worked as a manager at a Gramin bank. All the four siblings – Yogesh Mishra, Kshama Mishra, Madhuri Mishra, and Lokesh Mishra – had a difficult childhood. Hailing from a small town and a middle class family narrowed their scope of success in life, but with persistent hard work and will they are now working as civil servants.

Their father, Anil Prakash Mishra, who used to work as a Gramin Bank Manager, said, “Though I was a manager at a Gramin bank, I never compromised on my children’s quality of education. I wanted them to get good jobs, and my children also focused on their studies.”

He further added, “What more can I ask for? I hold my head high today because of my children.”

The Four Siblings Who Succeeded Against All Odds & Cracked UPSC

The eldest of all four brothers and sisters, Yogesh Mishra, is posted as an IAS officer. He did his schooling at Lalganj and then completed his B.Tech. from the Motilal Nehru National Institute of Technology.

After completing his engineering, he started a private job in Noida but kept on preparing for the UPSC Civil Service examination. In 2013, Yogesh cracked the prestigious UPSC exam and became an IAS officer.

Kshama Mishra, the second sibling, was also preparing for UPSC Civil Services but could not qualify for the examination even after three attempts.

However, Kshama worked hard and studied for several hours a day. She further worked on improving her weaknesses. This resulted in her bagging the IPS rank in her fourth attempt. She is now posted as an IPS officer.

The third sibling, Madhuri Mishra, graduated from a college in Lalganj and then moved to Allahabad to study for her postgraduate degree. After her masters, she also followed the path pursued by her elder siblings and cleared the UPSC exam in 2014 with All India Rank (AIR) of 66.

She is now posted as an IAS officer in Jharkhand.

The youngest of all four siblings, Lokesh Mishra, completed his B.Tech from IIT. He believes his IIT background made the Civil Services Prelims comparably easy to crack. He, however, relied on systematic preparation for the UPSC Main examination.

Lokesh cleared the UPSC Civil Service exam by securing an All India Rank (AIR) of 44 in 2015. He is currently posted in Bihar as an IAS officer.