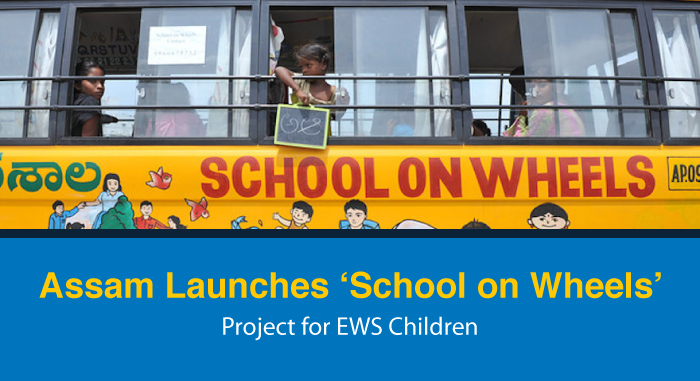 New Delhi, 16 August 2022- Assam Chief Minister Himanta Biswa Sarma, along with the Chief Justice of Guwahati High Court Justice RM Chhaya, recently launched the ‘Vidya Rath-School on Wheels’ project, which is aimed at providing elementary education to children of the state belonging to the the Economically Weaker Section (EWS) category. The project was launched at a function held on the premises of Gauhati High Court to celebrate India’s 76th Independence day.

While launching the scheme, CM Sarma said that there couldn’t have been a more auspicious occasion for launching the noble cause than the occasion of ‘Azadi Ka Amrit Mahotsav’ when India is celebrating 75 years of its independence. He also hoped that the project would be helpful in aiding the children who remain outside the ambit of formal education and bring them back into formal schooling.

Delighted to attend the launch of Vidya Rath, a project aimed at imparting elementary education to EWS students.

Gratitude to Hon Chief Justice of Gauhati HC Shri RM Chhaya for implementing the project in Assam. We shall extend full support to Gauhati HC for making it a success. pic.twitter.com/lKQterZEC8

Addressing the gathering at the Gauhati High Court, CM Sarma expressed his dismay over the situation of several children across the country who are forced to beg in the streets, bus stops, railway stations, or work as rag pickers and even get used to substance abuse. He said that these children are the future of the nation yet many of them drop out of schools due to the financial challenges of their families.

CM Sarma also noted that though the Central and State governments make the best of their efforts in educating children, a chunk of children still remain outside the ambit of formal education.

The ‘Vidya Rath-School on Wheels’ project will reportedly provide access to elementary education to EWS children for 10 months. After 10 months, the children will be integrated into the conventional system of education. The children will also be provided with uniforms and textbooks and free-mid day meals under the project.

The Status of Elementary Education in Assam

Assam is currently India’s 14th most populous state, with 3.55 crore people living in 33 districts. As per a 2018 research, Assam has made serious efforts in expanding elementary education, especially focusing on a large number of children of the age group 6-14. The research also mentions that though the number of elementary schools had been increasing rapidly, it seems the population has been increasing faster and the number of schools per lakh population has remained almost constant from 1971 onwards. Thus, the number of schools in the state is inadequate.

According to United Nations International Children’s Emergency Fund (UNICEF), elementary and primary education in Assam has registered considerable progress with retention rates for lower and upper primary school children increasing. As per the agency, nearly 67,000 elementary schools have been set up in Assam and approximately 90,000 children with different abilities have been mainstreamed into schools.

However, despite this progress, there are still over 1,00,000 children who are out of school in Assam. Further, there are issues of low attendance, high dropout rates, a high number of teacher vacancies, and decreasing budgetary allocations. This is posing a challenge to the quality and spread of education, especially for economically weaker children.

As per a recent report released by the Assam State Primary Teachers’ Association in March this year, 314 primary schools were found functioning without teachers across Tezpur, Dibrugarh, and Guwahati. The number of single teachers in schools in the state which earlier stood at 3085, also crossed the 4000 mark in January 2022.

For more information about the scholarships available for the students of Assam, click here.

What is the ‘Vidya Rath-School on Wheels’ project?

Assam Chief Minister Himanta Biswa Sarma, along with the Chief Justice of Guwahati High Court Justice RM Chhaya, has launched the ‘Vidya Rath-School on Wheels’ project, which is aimed at providing elementary education to the economically challenged children of the state. The project will reportedly provide access to elementary education to EWS children for 10 months. After 10 months, the children will be integrated into the conventional system of education. The children will also be provided with uniforms and textbooks and free-mid day meals under the project.

Who will be the beneficiaries of the ‘Vidya Rath-School on Wheels’ project of Assam Government ?

The Assam Government has launched the ‘Vidya Rath-School on Wheels’ project to empower the Economically Weaker Section (EWS) children by providing them with elementary education.

Which are the scholarships available for the students of Assam?

Currently, there are two main scholarships available for the students of Assam. The Post-Matric Scholarship for SC Students 2022-23, Assam is an initiative of the Ministry of Social Justice and Empowerment, Government of India for SC students of Assam studying in Class 11 and above. The other scholarship is the NEC Merit Scholarship for Students of NER 2022-23, which is an initiative for students pursuing a diploma/degree/postgraduate course or registered M.Phil./Ph.D. program. The second scholarship is being offered by the North Eastern Council, Ministry of Development of North Eastern Region, Government of India, Shillong to the eligible candidates of the North Eastern States. For more information about the scholarships, please visit the official website of Buddy4study.