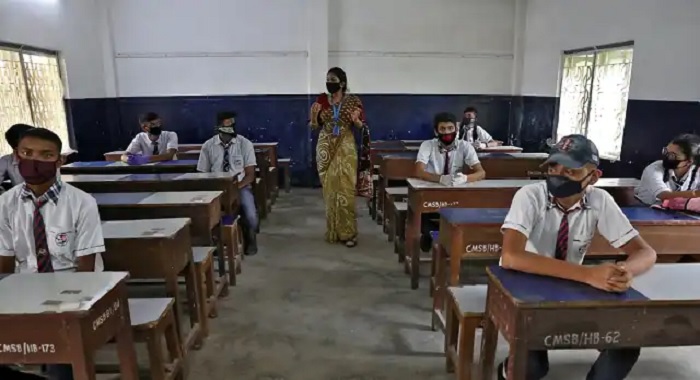 New Delhi, 10 February 2022 – A few Class 9 students of the SNBP High School (Pune, Maharashtra) were stopped from sitting in their final examination by the school administration on Tuesday, as their parents failed to pay the fees on time. When the students started entering the classrooms in the morning, two staff members, a teacher, and a coordinator asked the students whose fees were not paid to stand near the gate of the school.

The students were crying and stood clueless near the gate. One of the parents rushed inside the school and questioned the administration for “humiliating” the children. Sandeep Shirke, the father of a Class 9 student noted, “I had not paid the fees for only two months. Today [Tuesday], I was anyway about to pay a month’s fees. The staffers threatened to call the police when I tried to take pictures of the students being humiliated.”

Another anonymous parent from the school noted about the incident that around 60 students were asked to return home as they failed to pay the full fee. “There were teachers present at the school gate with a list of students who had paid partial or no fee, and students who had not cleared their dues were not allowed to enter the school premises,” noted the parent.

When contacted, D K Bhosale, the Director of the SNBP High School, said, “Parents of some of the students have not paid their fees for months despite repeated reminders and therefore the teachers took action today [Tuesday].”

The incident has triggered a row among the general public and Education Minister, Varsha Gaikwad’s office has stated that appropriate action will be taken against the school. “No school has the right to treat children in such a humiliating manner. We will direct education officials in Pune to take action against SNBP school.” an official from the office stated.

S Wakhare, Deputy Director of Education (Pune) noted, “We have been intimated by the minister’s office to investigate the matter. We will take action in the matter. There are clear cut directions from the government that during this COVID period, students should not be made to suffer because of non-payment of fees.”

Education Ministry Approached by Parents from Another School As Well

Several parents from another private school in Pune have also approached the Education Department and complained that their children were denied online education after parents were unable to pay full fees.

“Despite fee reduction orders by the state government, there has been no relief for parents. Students are struggling as their online education has been stopped by schools. Education department should take some action against such schools,” said a parent, on the condition of anonymity.