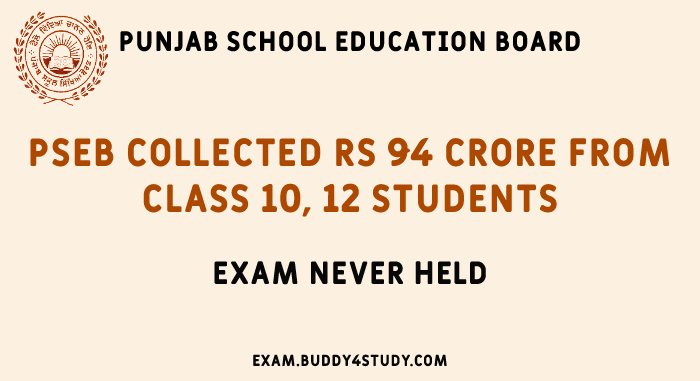 New Delhi, 8 April 2022 – The Punjab School Education Board (PSEB) has collected a total of Rs 94 crores from students of the state as the examination fee for Class 10 and Class 12 board exams. However, the exam was never held and the board cited the pandemic as the reason for not carrying out the examination. As fee, the board had charged Rs 1100 from each student, totalling Rs 38.75 crore from Class 10 and Rs 55.51 crore from Class 12.

Now, the PSEB board has asked the students to pay Rs 800 each for Class 10 and 12 exam certificates, which has caused a stir of protests in the state as students belonging to underprivileged sections of the state might not be able to come up with the money.

The Democratic Teachers Front (DTF) voiced concern over the fact and noted that the PSEB board made a profit worth crores of rupees for examinations that were never held. Vikram Dev, the President of DTF, noted in this regard, “We have raised our objection on the matter. A majority of the students belong to underprivileged sections. The move clearly shows that the government is insidiously making education unaffordable for them.”

Dr Yog Raj Sharma, Chairman of PSEB, addressed the issue and stated that it was wrong to say the board was making profits. He noted, “All preparations were made to conduct the exams. Even the question papers were printed. We could not conduct the exams due to high COVID cases.”

Now, the Punjab state board is again under public scrutiny as PSEB has ordered the students to pay a fee of Rs 800 to be able to get certificates of Class 10 and Class 12, respectively.

As per reports, the PSEB gave March 31 as a deadline for students to get their certificates physically or through the online mode by making a payment of Rs 800. Due to which, several government and private schools asked the students to deposit the amount and apply as soon as possible. This led the students into a frenzy and PSEB authorities had to issue a clarification that there is no deadline and students need not panic.

As students from underprivileged backgrounds were facing issues in coming up with the money for getting PSEB result certificates, the board announced that they could get free printouts from the Digilocker app. However, many students are now claiming that several colleges as well as passport offices are not accepting the DigiLocker printouts and require duly-signed and attested certificates of the PSEB as a documentary proof.

What examination fee was charged by PSEB?

Why is PSEB facing a backlash from students, parents, and organisations?

PSEB is facing a backlash because it charged Rs 1100 per student for Class 10th board and Class 12th board examinations and the exams were never held. Now, the board is again asking for a fee of Rs 800 from each student to provide them with certificates. This has led to a backlash as underprivileged students are unable to come up with the money.

Has PSEB refunded the money to the students?

PSEB has not refunded the money that was collected (Rs 94 crores in total). The Democratic Teachers Front (DTF) in Punjab has been raising its voice against this issue and has been demanding that the board refund the fee to the students. It is also demanding the Punjab board to not levy any fee on students to get their certificates.