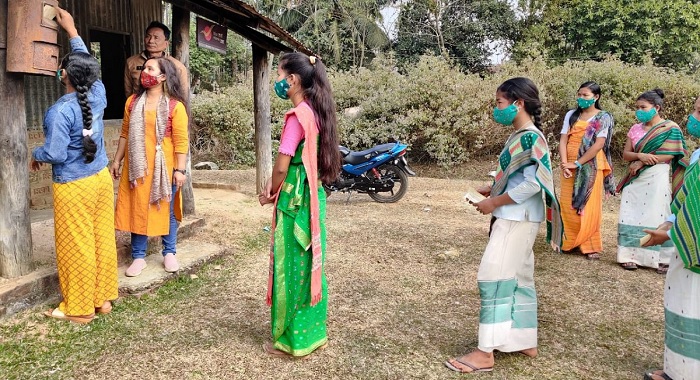 New Delhi, 28 January 2022 – More than 4500 adolescent girls from five districts of Assam (Kokrajhar, Dhubri, Jorhat, Tinsukia and Lakhimpur) have dispatched postcards to PM Narendra Modi, urging him to take note of the poor education facilities they face. These girls have noted that the quality of education in government schools is not up to the mark and their parents cannot afford private education. Plus, they have also noted that they have to walk up to 12 km a day just to reach their schools.

The girls have requested the PM to set up secondary schools every five kilometres in the state and to improve the amenities and quality of teaching in the existing government schools. They believe that doing this will reduce the dropout rate of girls in the state and help them achieve their educational and career-related aspirations.

Note: The postcards were dispatched under a campaign by ‘Champions for Girls Education, which is a forum of several organisations working with the Right to Education Forum and SCORE Network (UP). The campaign seeks to establish free and compulsory education for girls up to Class 12.

Over 4500 Girls Write to PM Modi – Champions for Girls Education

The letters were written under ‘Champions for Girls Education’, which is a forum of several organisations working with the Right to Education Forum and SCORE Network (UP). Two local NGOs, the North East Research and Social Work Networking (NERSWN) and Nedan Foundation are implementing the campaign in several districts of Assam.

Regarding the issue, Rita Brahma of the NERSWN NGO stated that, “Most girls drop out after Class 8 and fall prey to early marriage, trafficking, and child labour.”

Similarly, Digambar Narzary of the Nedan Foundation stated, “Those who secured low marks could not get admission in government higher secondary schools. Due to poor economic conditions, they could not afford to get admission in private institutions either and so many have dropped out of their education.”