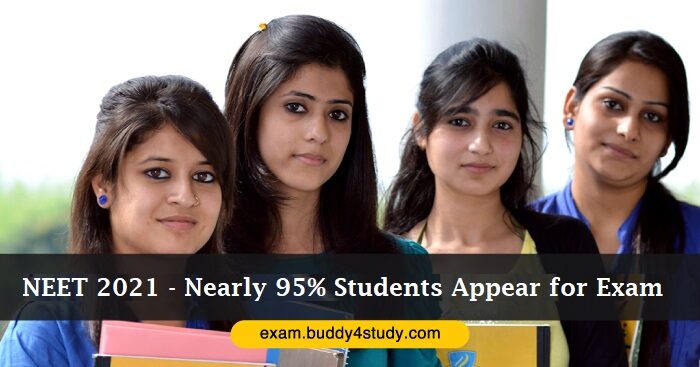 New Delhi, 13 September 2021 – Nearly 16 lakh students wrote the National Eligibility-cum-Entrance Test (NEET) on Sunday, 11th September 2021 to secure admission to undergraduate medical and dental programmes (MBBS, BDS, AYUSH, Veterinary, and other medical/paramedical courses) across the country. This year, more than 95% of aspirants appeared for the NEET exam amid the pandemic, which is quite high from the previous year’s percentage of 85.57.

NEET 2021 was held at more than 3,800 centres in 202 cities in India and abroad. The exam authorities followed all the Government-underlined COVID-19 safety protocols to prevent cases of infection. In fact, in many centres, separate rooms were provided for students who tested positive.

A record 16.14 lakh candidates had registered for NEET this year, which is the highest in the past 5 years. As per NTA, the maximum and the minimum number of test-takers have been registered in Jaipur and Kavaratti (Lakshadweep Islands) respectively.

Note: As per one of the NTA officials, nearly 18,000 candidates from Chennai had registered for the NTA NEET exam 2021, out of which, around 17,000 aspirants appeared for the exam. More than 800 students were recorded absent.

Amid COVID-19, Kerala saw the best female to male ratio of NEET students. Close to 2 lakh female candidates appeared from this state, which is higher than most of the other states. A close calculation (unofficial) highlighted that the female-male ratio during this year’s NEET exam was 3.8: 1!

With the schools and various coaching centres operating online amid this pandemic, a bulk of NEET preparation took place online. However, the added stress of uncertainty over the conduct of the board examinations took a toll on the preparation of NEET.

So, for the first time, NEET has provided an added benefit to the aspirants. An extra 20 questions to the existing 180 has been added so that students had some choice in the question paper, unlike the previous years. The concession was on account of the pandemic and the reduced syllabus. The NEET 2021 question paper was of 720 marks in total.