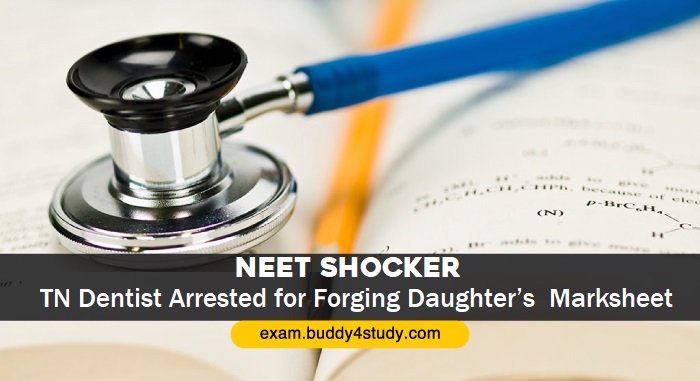 As confirmed by the Tamil Nadu police, a 47-year-old dentist named Balachandran has been arrested for allegedly forging his daughter’s NEET scorecard and call letter for MBBS admission. The dentist, hailing from Ramanathapuram district, was detained and produced before a court which then remanded him to judicial custody on Friday. As per a police officer, a complaint against the arrestee had been lodged by the Directorate of Medical Education (DME) at the Saidapet sub-jail.

Later, in a complaint to the Periamet police, the Additional Director of Medical Education and Secretary of the Selection Committee, G Selvarajan stated that the candidate had only secured 27 marks in NEET and had submitted a “forged” marksheet and a call letter. After this shocking revelation, the incident was brought to the notice of the police and the accused dentist was busted.

Similar to this case, a shocking NEET impersonation scam rocked the state of Tamil Nadu in 2019, when 9 people were arrested which included a bunch of medical aspirants as well. These candidates had allegedly hired expert proxies, who eventually passed the NEET exam on their behalf but were later scrutinized by the NEET counselling authorities and taken into custody by the Tamil Nadu police.