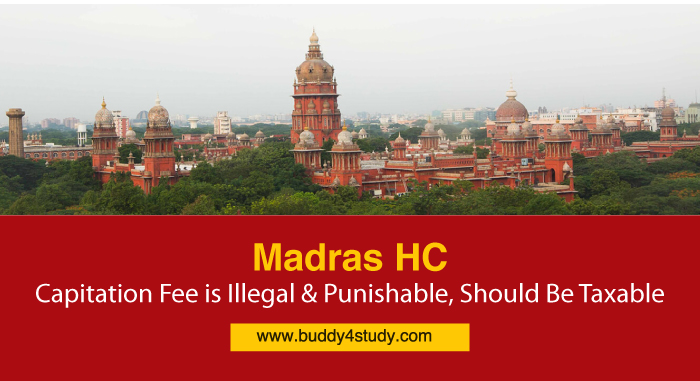 New Delhi, November 1, 2022, Madras HC Verdict: The Madras High Court has held that any donations or amount collected by private educational institutions in exchange for admissions shall be termed as “capitation fees” and such collection of capitation fees is illegal and punishable. The bench was hearing the batch of cases related to Income Tax proceedings filed by the Commissioner of Income Tax, Chennai.

The Income Tax department challenged previous orders passed by the Income Tax Appellate Authority and the Income Tax Tribunal in favour of three educational institutes from the State and some charitable trusts affiliated with the institutes.

As per media reports, the Madras High Court said in its verdict: “The Assessing Officer shall also proceed to reopen the previous assessments, if permissible by law, based on tangible materials relating to collection of capitation fee, since it is illegal and is punishable”.

1.What is a donation or capitation fee?

Donation or Capitation Fee is a payment done by a student who could not qualify or who did not get the required marks in the exam conducted by the respective private college or university. Usually, donation means paying to the authority to get a management quota seat.

2. How to deal with the problem of donation and capitation fee?

The problem of capitation fee has been there in India for a long time now. The illegality of collecting capitation fee cannot be ignored as it has clearly become an established pattern of collection by numerous educational trusts.

3. Is giving donations to universities legally allowed in India?