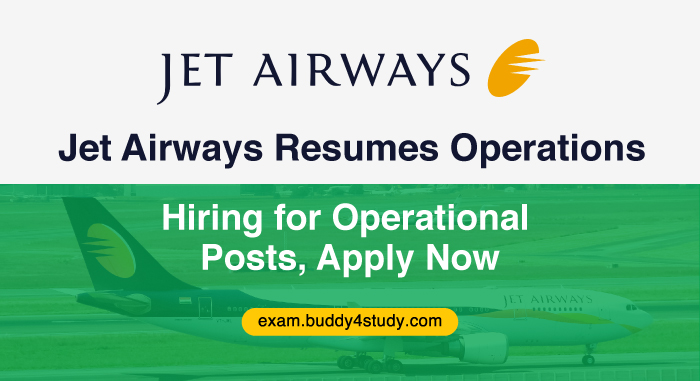 New Delhi, 24 May 2022: The Jet Airways hiring drive to fill managerial and operational positions within the organisation is in progress. The company will be hiring for operational positions in Gurugram. Graduates and postgraduates with aviation experience, as well as eligible freshers, may apply for the positions. However, preference will be given to previous Jet Airways employees. Interested candidates must share their CV/resume at: careers@jetairways.com.

“Join our Network Planning team to help us perfect our new route network! We want to hear from you if you are driven by enthusiasm and passion, if you want to be a part of history being made, and if you match the conditions listed below.” Jet Airways stated in a tweet.

We have our AOC, and now we focus on building up the rest of our team as we prepare to resume operations! pic.twitter.com/IhAv64nXaC

The vacancies posted are advertised explicitly for the Gurugram location.

Note: Former Jet Airways employees will be given preference.

The airline was previously owned by Naresh Goyal and had its last flight on 17 April 2019 due to financial difficulties. Jet Airways’ operations were halted in 2019 as the airline’s promoters failed to supply liquidity, and the airline’s insolvency proceedings began in June 2019. A consortium of lenders, led by the State Bank of India (SBI), filed an insolvency petition in June 2019 to recover unpaid dues totalling over Rs 8,000 crore.

Now, Jet Airways’ current promoter, the Jalan-Kalrock consortium, plans to resume commercial flight services in the July-September season. With DGCA (Directorate General of Civil Aviation) officials on board, the airline successfully executed five proving flights on May 15 and 17.

Jet Airways 2.0 will soon be ready to resume commercial flight operations after the DGCA gave it a revalidated Air Operator Certificate (AOC). According to media reports, Arun Kumar, Chief Directorate General of Civil Aviation (DGCA) said on Friday (20 May 2022) that the airline had been granted an AOC.

Thus, Jet Airways declared its comeback with the hashtag #JetAirwaysIsHiring on Twitter.

Jet Airways CEO, Sanjiv Kapoor, has stated that the airline plans to resume commercial operations in September. Additional senior management appointments will be announced, and operational hiring will begin in earnest, with former Jet Airways employees given preference whenever possible, according to Kapoor.

Kapoor commented, “The top 3 priorities for any CEO should be 1. Create the right culture. 2. Hire the best people, treat them well, and pay them fairly and on time, 3. Help develop the best strategy.”

Yes, a day after DGCA granted it an AOC, Jet Airways will resume flight operations again. The airline has announced hiring for operational roles and invited applicants.

What happened to Jet Airways?

Jet Airways' operations were halted in 2019 as the airline's promoters failed to supply liquidity, and the airline's insolvency proceedings began when a consortium of lenders, led by the State Bank of India (SBI), filed an insolvency petition in June 2019 to recover unpaid dues totalling over Rs 8,000 crore.

Yes, the company has noted that it will give preference to its previous employees.

Yes, freshers may apply for the Jet Airways hiring but they must possess a minimum bachelor’s degree in a relevant field of study (Statistics, Operations Research, Business Administration, Mathematics, Economics, Science and Engineering).