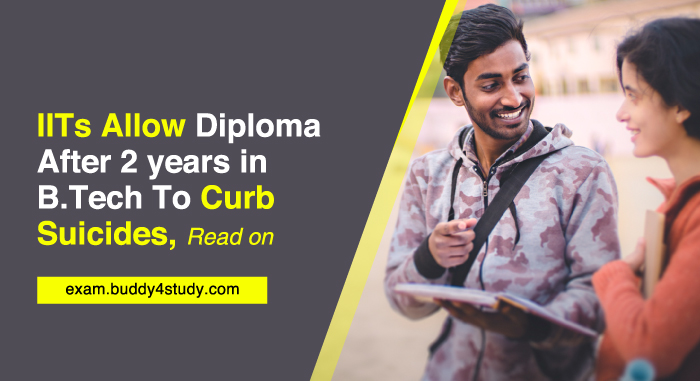 New Delhi, 02-11-2022, Diploma for IIT Students: The Indian Institute Of Technology (IIT) has introduced new courses in the form of a Diploma and Bachelor of Science (B.Sc) to help students cope with stress. The reason behind this is the fact that the suicide rate among IIT students has been rising.

The IIT has said the provision of B.Sc. (Engineering) and the proposal for a Diploma (Engineering) may be able to address the issue of academic stress to a great extent.

A former IIT teacher told the media: “Parental expectations often add to the pressure, and the teachers’ workload often prevents them from paying attention to the students and their problems individually.”

Note: IIT’s are planning out an exit option with a diploma after two years for B.Tech students, who are unable to handle academic pressure.

Diploma for IIT Students – Plans of an Exit Option

Note: All the deaths were reportedly caused due to academic pressure.

A. More than ten lakh students compete for eleven thousand odd seats. Each student who enters an IIT has aced every test in high school. Supportive parents, constant guidance from a coaching center, combined with remarkable diligence lands the student in the institute. But, the expectations in IIT’s are overwhelming, so students succumb to pressure.

Q. Will the newly launched courses be helpful to students?

A. Yes, the newly launched courses in the form of diploma for IIT students are expected to prove helpful; as they may come with an exit option as well in future. The courses will help identify students’ weaknesses and help them decide if they want to remain in the mainstream or leave. It will help them deal with stress and high expectations.

Q. What should a student suffering from stress and depression do?

A. The student can take the help of counselling from a psychiatrist or psychologist. Visiting a therapist can help a depressed student. Someone who is suffering closes him/herself to all interaction out of fear of being judged. Students must not overthink the problem, as all are dealing with the same stresses.