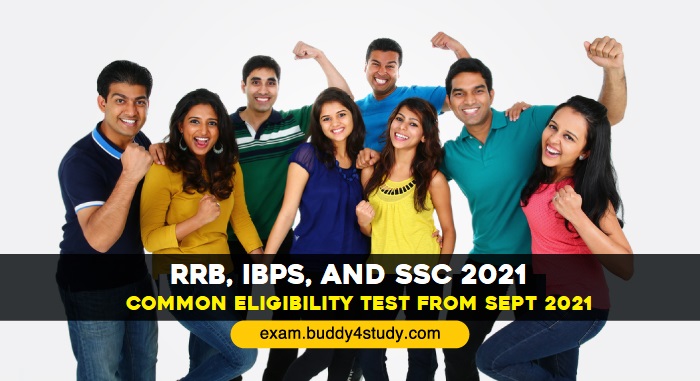 From September 2021 onwards, the NRA (National Recruitment Agency) would be conducting the Common Eligibility Test or CET for RRB (Railway Recruitment Boards), IBPS (Institute of Banking Personnel Selection), and SSC (Staff Selection Commission). The Common Eligibility Test is one singular exam which will be conducted for these select categories of government jobs in order to avoid conducting several tests. The CET will act as first-level screening for candidates followed by domain-specific exams/tests which will be conducted by respective agencies such as SSC, RRBs and IBPS.

The Government of India has set up the NRA as an independent, professional, specialist organization for conducting CET. The main objective behind the introduction of CET is to eliminate the multiple tests format to select candidates for non-gazetted posts in the central government and public sector banks.

The Minister of State for Personnel, Jitendra Singh, stated on Wednesday, 4th February 2021, “The mandate of the National Recruitment Agency (NRA) is to conduct first-level screening of candidates through the CET at the graduate, higher secondary and matriculate levels for the Staff Selection Commission (SSC), Railway Recruitment Boards (RRBs) and the Institute of Banking Personnel Selection (IBPS).”

Singh clarified that NRA will conduct ONLY the preliminary screening of candidates. For this purpose, the NRA would identify language experts to translate the question bank/paper in all regional languages included in the 8th schedule of the Constitution.

Besides the above statement, in a written reply to Lok Sabha, Mr. Singh stated, “Based on the screening done at the CET, the final selection will be made. This final recruitment will be done through domain-specific examinations/tests and will be conducted by respective recruitment agencies.”