Home » Engineering » BE or BTech – Which One To Choose? Fee, Salary & Scope Comparison 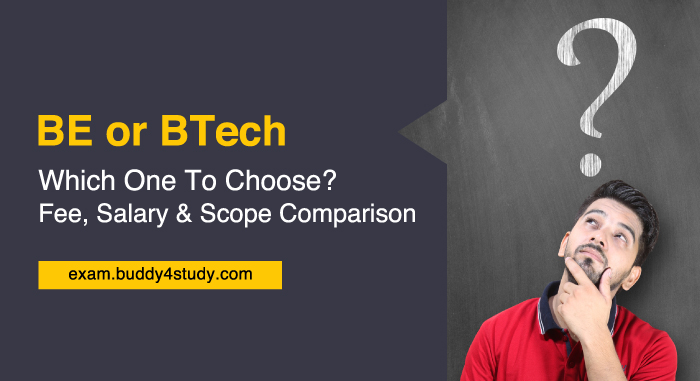 BE or BTech – As per the data suggested in media reports, India produces nearly 15 lakh engineers every year – making engineering one of the most sought-after career paths in the country. Now, with the advent of technologies like Artificial Intelligence (AI), Data Analytics, Data Science, and more, the rate of admission in engineering is at an all-time high.

According to a study by Statista, conducted across 993 universities, 38102 colleges, and 8631 stand-alone institutions, more than 28 lakh Indian students enrolled in engineering disciplines (Computer Science, Mechanical, Electronics, Civil, and Electrical) in 2020. 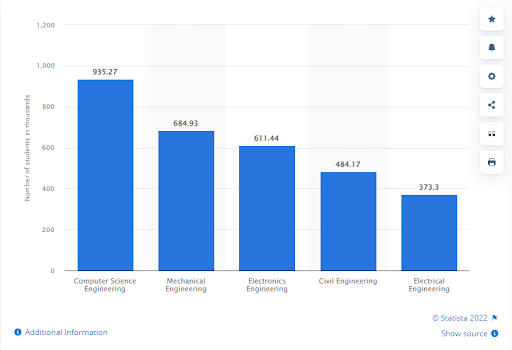 After considering the dataset presented above, one can’t argue with the fact that there is immense demand for engineering courses in India. In India, an engineering degree holds value in monetary, career growth as well as cultural terms.

Now, students who want to become engineers in India are vehemently confused between pursuing a BE degree or a BTech degree. On a fundamental level, both are bachelor courses in engineering. On a microscopic level though, there is a clear difference between the two.

This article intends to bring to light that very difference and help aspiring engineers to choose the best degree out of the two. To begin with, we will lay down the logistics of pursuing both the degrees and then chart down the differences between the two.

Students are advised to go through the whole article – to get the most out of our discussion and make an informed decision about which degree to pursue.

BE or BTech – Bachelor of Engineering (BE) – At a Glance

Bachelor of Engineering (BE) – Course Highlights

*The fee range depicted is mostly for reputed government colleges offering the degree. The fee at some private colleges is even higher than what has been depicted.

What is a Bachelor of Engineering (BE) Course?

Bachelor of Engineering (BE) is a four-year course and comprises eight semesters (two semesters each year). It is mainly a theory-based course and focuses on gathering theoretical knowledge about the engineering aspect of science.

Through a BE course, students get to understand the fundamentals of science and engineering, and can then become engineering graduates after completing their degrees.

A few popular BE courses are:

What does a Bachelor of Engineering (BE) Course Entail?

Students who enrol in a BE course learn about their subject as well as other related subjects (branches) of engineering.

This means that if a student is pursuing a Bachelor of Engineering in Civil Engineering, he will also receive knowledge related to Mechanical Engineering and other engineering branches in the first few semesters. Later on, the focus will shift to only Civil Engineering (or whatever specialisation is chosen).

Note: The focus of a BE degree is to provide in-depth theoretical knowledge about the concerned area of engineering.

What is the Eligibility Criteria for a Bachelor of Engineering (BE) Course?

What Salary Does a BE Graduate Receive?

As per Ambitionbox.com, the starting BE graduate salary in India, on an average, is INR 4.2 lakh per annum (LPA). However, the salary can be higher for skilled individuals and for students who are in specialised branches like computer science, metallurgy, geology, among others.

Which Colleges Offer a Bachelor of Engineering (BE) Course?

To know about some of the top-paying engineering branches in India, please click here.

BE or BTech – Bachelor of Technology (BTech): At a Glance

*The fee range depicted is mostly for reputed IITs, NITs, IIITs, and government colleges offering the degree. The fee at some private colleges is even higher than what has been depicted.

What is a Bachelor of Technology (BTech) Course?

Bachelor of Technology (BTech), just like BE, is also a four-year course and comprises eight semesters (two semesters each year). However, the main difference is that BTech is mainly skill-based and focuses on gaining experiential knowledge of the concepts, and is also supremely specialisation focused.

Here are some of the BTech courses that students pursue:

What does a Bachelor of Technology (BTech) Course Entail?

Students who enrol in a BTech course specialise in only their domain, and unlike BE, get to learn about other related subjects (branches) of engineering to a very limited extent. From the very first semester, they begin learning mostly about their own choice of engineering branch.

This means that if a student is pursuing a Bachelor of Engineering in Civil Engineering, the majority of knowledge he will receive will be related to Civil Engineering, and not of other-related branches. The skills that will be taught include planning, designing, construction, and management of industrial construction and maintenance of highways, roads, and railway tracks. This way, the student will be taught about the executional aspect of engineering. On the other hand, in BE, the student will be taught about the knowledge and theory aspect of engineering.

Note: The focus of a BTech degree is to provide in-depth practical and experiential knowledge about the concerned area of engineering.

What is the Eligibility Criteria for a Bachelor of Technology (BTech) Course?

Note: Students who do not get admission in government colleges can get into private engineering colleges too, however, they will have to pay higher amounts as fees to get admission.

What Salary Does a BTech Graduate Receive?

Students have to note that there is not a lot of difference between BTech and BE salaries. As per Talent.com, the average starting salary for a BTech graduate in India is INR 3.37 LPA.

Note: This might seem lower than what BE graduates make in urban or Tier 1 cities. However, most of the reported salaries come from students across the country who have completed their engineering degrees from private universities. Plus, since BTech is a skill-based course, consistent upskilling and job experience will pave the way for a higher salary.

Which Colleges Offer a Bachelor of Technology (BTech) Course?

Bachelor of Technology (BTech) courses are offered mostly by special colleges and universities, which are classified as institutes of national importance and include IITs, NITs, and IIITs. Other government and private colleges also offer these courses.

Some of these colleges are:

BE or BTech – Which One is Better?

After going through the information we provided in the earlier sections, candidates must have realised that there are not a lot of differences between the two degrees. This is why, none of the degrees is better than the other.

Then, the question arises – “Which one should I go for?”

The answer lies in the difference between the two degrees!

However, before that, here are the similarities in both degrees:

ALSO READ: WHAT TO DO AFTER BTECH? CAREER OPTIONS, HIGHER STUDIES, UPSKILLING & MORE

How Should One Choose Between BE and BTech?

Once the differences between the two are clear, here are the two defining factors that will determine which degree a student should go with.

Whether one should choose a BE degree or a BTech degree depends first and foremost on one’s interest.

When to go for a BE degree?

When to go for a BTech degree?

That said, ultimately, there is not much difference between the two degrees and candidates will find themselves with equal opportunities in their chosen fields. That is precisely why most companies also do not differentiate between candidates having a BTech or BE degree.

Even the jobs offered to candidates having the two degrees are the same. Some of the positions offered include:

JOB POSITIONS FOR BE & BTECH GRADUATES

Due to the fact that organisations give equal weightage to both degrees, the one factor that can make or break a student’s career is the college or university chosen.

Experts believe that students should choose colleges instead of courses – when it comes to the two degrees.

A highly reputed college – like an IIT or a tier-1 government institute – will have the best faculty, great learning facilities, intelligent peer group, and a supremely effective placement cell. All of this translates into better campus placements for students – as the top companies in India visit these colleges.

Some of these top recruiters are:

TOP INDIAN COMPANIES FOR BE AND BTECH GRADUATES

Both options are equally good!

BE or BTech – Final Comparison

Are BE and BTech the same?

Which is more valuable, BE or BTech?

Currently, there is not much difference between the two and both are considered equally important.

Is BTech harder than BE?

Both degrees acquaint the students with the basic and advanced concepts of engineering. Since BE is more theoretically inclined and BTech is more practical, both are not considered easy to pursue and the student has to study sincerely to excel in any of the two domains.

What course offers more salary and scope, BE or BTech?

BE and BTech are both bachelor engineering degrees with similar fees and salary packages. Thus, it depends more on what the student prefers to pursue and less on which course offers better salary – as both are considered equivalent in value as far as career prospects and salary packages are concerned.

Which course is best in BTech?

In BTech, as per Statista.com, more than 28 lakh students enrolled in engineering in 2020 in the following five disciplines – Computer Science, Mechanical, Electronics, Civil, and Electrical. Apart from these, students also pursue Information Technology with equal zest. Thus, these six courses are considered the best and the most sought-after when it comes to engineering.