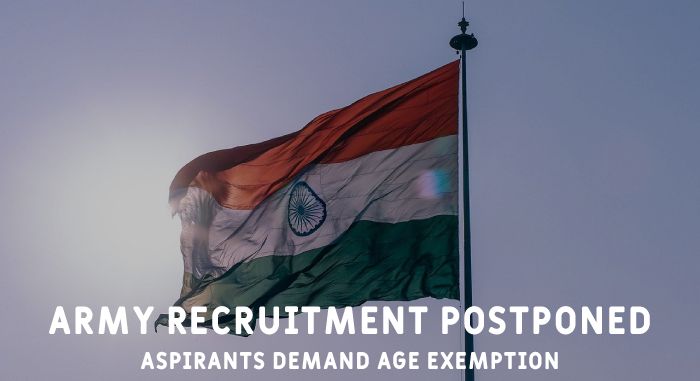 New Delhi, 8 April 2022: On Tuesday, aspirants seeking jobs in the Indian Armed Forces across the country staged a protest in Delhi due to the postponement of the army recruitment examination. As per media reports, the protestors complained that the written exam has been postponed repeatedly and demanded an age exemption of two years.

“No recruitment taking place for the last 2 yrs. To raise the issue I started running from Rajasthan’s Sikar on 29th March & reached Delhi on 2nd April, covered 60-70 km every day,” says a protester pic.twitter.com/37xQ7fxDgB

No recruitment had taken place since the last two years due to the COVID-19 pandemic and the Indian Army written exam (Common Entrance Examination [CEE]) has been delayed repeatedly. One of the protesters who ran from Rajasthan to Delhi to show his displeasure commented,  “No recruitment has taken place for the last 2 years. To raise the issue, I started running from Rajasthan’s Sikar on March 29, reached Delhi on April 2 and covered 60 to 70 km every day.”

The protestors are demanding the government to conduct recruitment rallies and provide an age exemption of two years, so that candidates who are near the upper age limit can still appear for the exam.

Government on Recruitment and Age Exemption

Last month, the Ministry of Defence declared that there is no fresh induction of any fresh recruits and there has been a drastic decrease in the number of soldiers leaving the army. Minister of State for Defence, Ajay Bhatt, said that “All Recruitment Rallies planned by Army Recruiting Offices/Zonal Recruiting Offices have been suspended till further orders due to the prevailing COVID-19 situation in the country.” The Common Entrance Examination (CEE) was not conducted due to the prevailing pandemic situation, therefore, there was no fresh recruitment in place.

In response to a question about whether the government would provide a possibility by lowering the maximum age restriction owing to a delay in the recruitment exam, Bhatt added that there has been no such proposal being considered by the Indian Armed Forces or the Indian Air Force. He further noted, “However, the Indian Navy has granted a one-time age relaxation of six months to candidates in the recruitment cycle for the first batch of the year 2021 in the aftermath of COVID-19 as a special case.”

Why are army aspirants protesting?

Aspirants seeking jobs in the Indian Armed Forces across the country are protesting because the army recruitment exam was postponed due to the pandemic and several candidates are worried that they might not be eligible - as per the upper age criteria - for the recruitment.

What are the demands of the protestors?

The protestors are demanding the government to conduct recruitment rallies and provide an age exemption of two years, so that candidates can still appear for the exam.

What is the current age requirement for Indian Army recruitment?

The age requirement for Indian Army recruitment is between 20 to 27 years.