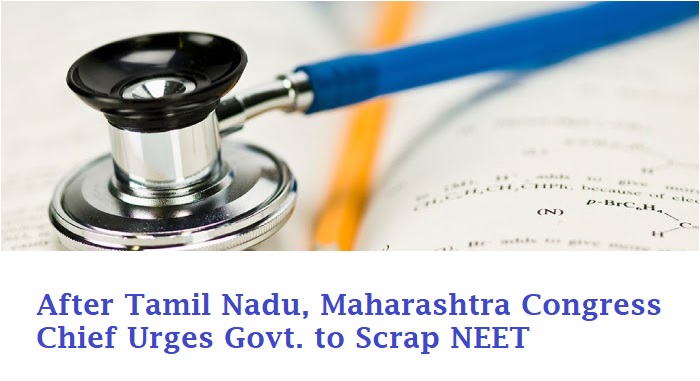 New Delhi, 23 September 2021 – Days after the Tamil Nadu government introduced a bill to scrap the National Entrance-cum-Eligibility Test (NEET), Maharashtra Congress President Nana Patole urged the state government on Tuesday to eliminate NEET and protect the interest of rural and poor students. After Patole’s appeal, the Maharashtra government on Wednesday said that it will review the situation and see if it is good for students or not.

Speaking to a media news agency, Maharashtra’s Minister for Medical Education, Amit Deshmukh stated, “The scrapping of NEET by the Tamil Nadu government has given rise to new discussions if the national medical entrance test is right for the state or not, and what will be better for the future of the students.”

Tamil Nadu scrapped NEET exams, it gave rise to discussions if NEET is right for states or not & what will be better for students’ future. We’ll collect all info & decide after considering pros & cons. We’ll clear Govt’s stand: Amit Deshmukh, Maharashtra Min for Medical Education pic.twitter.com/411u3jpnJr

Comparing NEET with the Vyapam scam, Nana Patole said that the Maharashtra Government must make sure that they exempt the medical course aspirants from NEET, just like Tamil Nadu. He wrote a letter to Maharashtra Chief Minister Uddhav Thackeray asking him to scrap NEET in the state.

In the letter, Patole said that like Tamil Nadu, Maharashtra should also consider offering medical aspirants the chance of admission to medical colleges based on their Class 12 scores. He also presented a number of points that the Maharashtra Government should consider before taking any decision on NEET.

“Frequent cases of papers getting leaked and cases of dummy students appearing for the exam are coming to light,” Patole retorted.

He further said, “In my opinion, the existing pattern of NEET is adversely discriminating against rural aspirants. I think Maharashtra should study the Tamil Nadu legislation and bring in a new law.”

NEET 2021 question paper was circulated about 37 minutes after the start of the exam via WhatsApp. The role of an alleged impersonator for taking the exam on behalf of the student is also being investigated.

The CBI on Wednesday booked a Maharashtra-based coaching institute for alleged involvement in cheating in the NEET 2021 examination. It was revealed that the coaching centre asked students to pay Rs 50 lakh for someone else to write their exam.