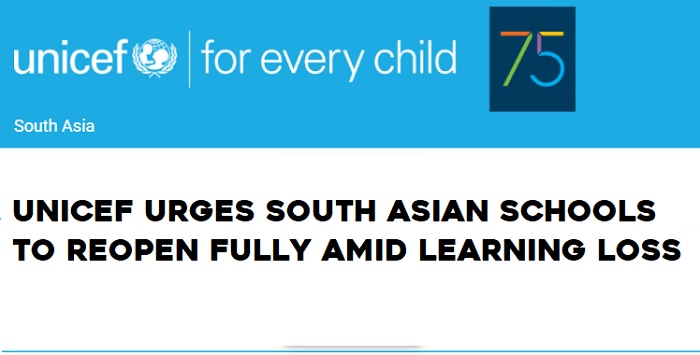 New Delhi, 10 December 2021 – According to the United Nations International Children’s Emergency Fund (UNICEF), schools in South Asian countries, particularly India and its neighboring countries should reopen completely to avoid any further learning loss. UN officials also warn that if schools are not re-opened fully in the near future, the consequences of that learning loss could last decades.

Schools in countries like India, Bangladesh, Pakistan, Srilanka, and Nepal were closed to avoid the spread of the COVID-19 virus. This closure lasted more than 32 weeks; plus, in some location it lasted even longer. This caused a loss of learning for more than 400 million students in these countries.

The United Nations (UN) believes that the main cause of learning loss in India and its neighbouring country is digital divide. As the pandemic caused schools closures, a need for remote education became prevalent. Students who had access to the internet were able to keep learning. While children who did not, suffered in terms of education.

UNICEF’s regional director for South Asia, George Laryea-Adjei, noted that this loss happened in regions where digital access was scarce and financial resources were not readily available. He told Agence France-Presse (AFP), “This happened in a region where there were no strong conditions for remote learning. Access to the internet and devices was very uneven. And we see a severe learning deficiency, especially among poor communities and girls — because often boys are more trusted with technology.”

Talking about the need to reopen schools, UNICEF Regional Director for East Asia and Pacific, Marcoluigi Corsi states, “We cannot overlook the impact that the disruption of education services has had on children, particularly the most vulnerable. When schools remain closed, children miss out on the biggest opportunity to learn and develop to their full potential. The future of an entire generation is at stake; therefore, we need every effort to ensure a safe reopening of schools as soon as possible. Otherwise, the learning loss will be difficult to overcome.”

Thus, UNICEF deems it paramount that schools in South Asia be reopened safely and in-person classes be resumed. Otherwise, the cost would be a weaker labour force in the future, which would lead to long-term consequences.