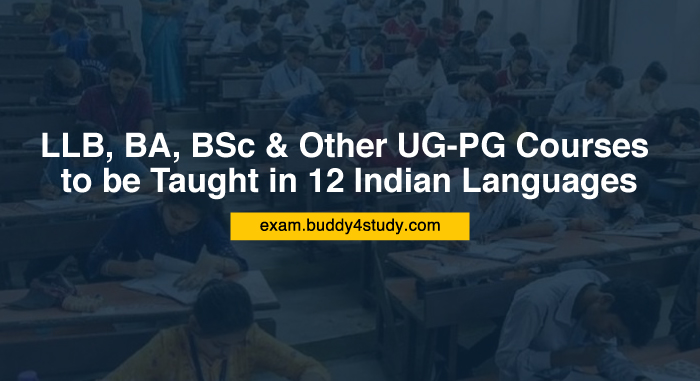 October 20, 2022, New Delhi – The University Grants Commission (UGC) has decided to make full-time undergraduate (UG) and postgraduate (PG) courses available in 12 different Indian regional languages. The translation work is currently in progress, and the newly translated study material for these courses will be available from the academic session of 2024.

Previously, the Indian Government has implemented changes in Bachelor of Medicine and Bachelor of Surgery (MBBS) and Bachelor of Technology (BTech) by introducing multiple regional languages to different courses of the respective domains.

Now, the government has decided to implement the same for the courses such as – Bachelor of Law (LLB), Bachelor of Arts (BA), Bachelor of Nursing (B.Nurs.) and others to provide a better learning environment and opportunities for students belonging to different language backgrounds.

Mr. Chamu Krishna Sashtri, Chairman of the Bharatiya Bhasha Samiti (a high-powered committee for the promotion of Indian languages, under the Ministry of Education) is optimistic about translating the textbooks of most of the courses. This translation work will be done in two phases.

Initially, the government declared to convert the course syllabus of UG and PG into 12 major regional languages. The list of languages is given below:

The other 10 regional languages that are yet to be included in the translation work are mentioned below:

Note: Though the translation activities have been planned for all the domains, starting from Science, Technology, Engineering, and Mathematics (STEM) to other disciplines, Hindi and English will be the popular languages to be used.

UG and PG Courses – List of Universities to Implement Translation

The Indian Government has notified more than 200 universities to implement the changes in different undergraduate and postgraduate courses. Some of the names of the universities are listed below:

When will the courses be available in the regional languages?

The courses will be available in the regional languages from the academic session of 2024.

Who has decided to translate the PG and UG courses in different regional languages?

The University Grants Commission (UGC) by the instructions of the Government of India has decided to translate PG and UG courses in 12 different Indian regional languages.