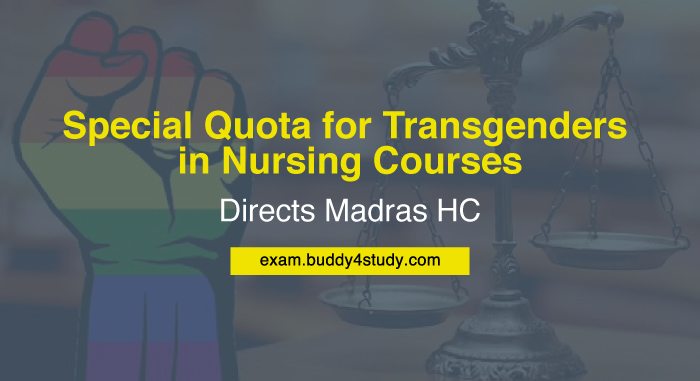 October 14, 2022, New Delhi, Transgender Reservation: The Madras High Court has ruled that transgenders are entitled to a special reservation under the Third Gender category for admission to Post Basic Nursing and Post Basic Diploma in Psychiatry Nursing courses.

The High Court of Madras has also directed the Tamil Nadu Health and Family Welfare Department and Directorate of Medical Education, Chennai to include the petitioner, S Tamilselvi, in the Third Gender category for admission to the nursing course for the academic session 2022-23.

What does transgender mean?

Transgender is a term used to describe people who do not recognise themselves with the gender identity they were assigned at birth.

What is “Third Gender”?

The term “Third Gender” is used to describe people who do not recognise themselves as female or male.

What are the eligibility criteria for a transgender person to get admission to a Diploma in Psychiatry Nursing course?

The eligibility criteria for a transgender person to get admission to a Psychiatry Nursing course are – a B.Sc. in Nursing course, a nursing license, and a minimum of 50% marks in the UG course.