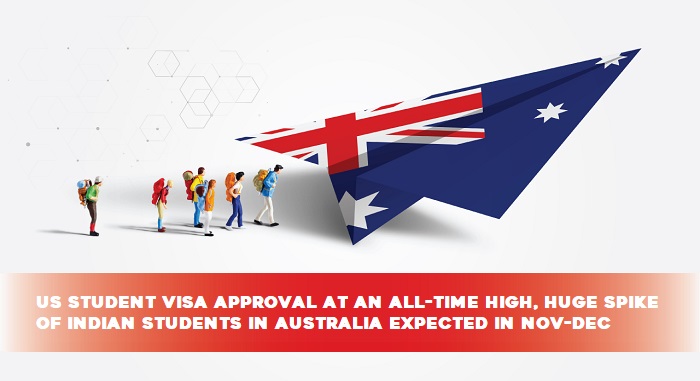 A year after study abroad witnessed the steepest decline, Indian students are flocking back to the United States owing to the record number of student visa approvals in 2021. Despite the ongoing pandemic loom, the US has granted student visas to 55,000 Indian students and exchange visitors. Making a surprise announcement, the United States mission confirmed that more student visa applications have been approved in India in 2021 than ever before. At the same time, reports from other parts of the world show that students are facing delays in getting US visa grants for the Fall semester of 2021.

Conventionally, the US embassies and consulates begin the interviewing process for fall term students in the moth of May. However, due to the second wave of COVID-19, the student visa session was paused for almost 2 months. With the travel and other restrictions getting lifted, the visa services to the US have accelerated with the consular teams working additional hours for student visa appointments.

Australia and Canada Still to Open Its Visa Counters

Australia has kept its borders closed to international students for more than a year and a half now. While the Australian government has hinted that the travel restrictions would remain in place till mid-2022, India has urged Australian Foreign Ministry to ease the regulations for thousands of Indian students who have been unable to enter the country ever since COVID-19 began. Education counsellors in India, in the meanwhile, are expecting a dramatic increase in visa numbers in November and December into Australia for February admissions.

Research shows that students are making their study abroad decisions in 2021 based on some extra set of factors, including border rules, vaccination rates, and availability of physical or in-person learning. Since Australia till now is not giving positive signs on any of these factors, Indian students are reportedly mulling over other options.

Due to very high demand, similar visa lags for students aspiring for Canadian colleges and universities continue. Additionally, with the extension to the ban on direct flights from India, Indian students have to take third country routes to reach Canada.