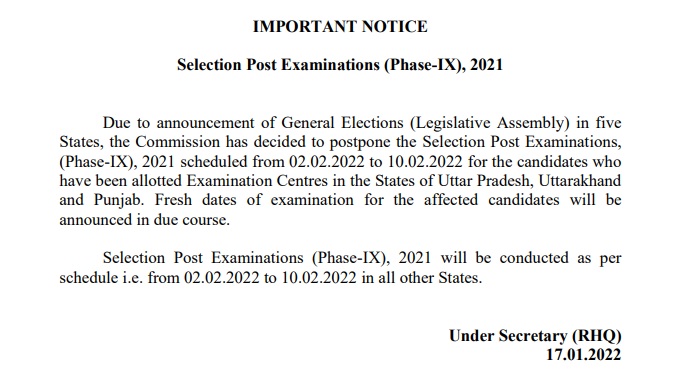 New Delhi, 18 January, 2022: The Staff Selection Commission (SSC) has released an important notice regarding the postponement of SSC Phase-9 examination 2021. Due to announcement of General Elections (Legislative Assembly) in five states of Uttar Pradesh, Uttarakhand, Punjab, Goa, and Manipur, the commission has decided to postpone the Selection Post Examinations (SSC), Phase-9 2021 for the candidates who have been allotted examination centres in the states of Uttar Pradesh, Uttarakhand, and Punjab.

Note: The commission is likely to announce new dates for the exams in these three states in the coming days. Candidates are advised to regularly check the official website for latest updates.

1. The SSC Phase-9 recruitment drive aims to fill up a total of 3261 vacancies for the following posts:

2. The recruitment notification for Phase-9 selection posts has been released in September, 2021.

3. Candidates were asked to submit the online applications from 24 September to 25 October, 2021.

In the question paper, there will be four parts as follows:

The Staff Selection Commission (SSC) is an organisation under the administrative supervision of the central government. It takes care of recruitments in various government departments. SSC exams are one of the biggest recruitment drives carried out in India.

Here are some of the most important SSC exams:

Note: Apart from all these regular examinations, SSC conducts various advertisements for multiple posts throughout the year.