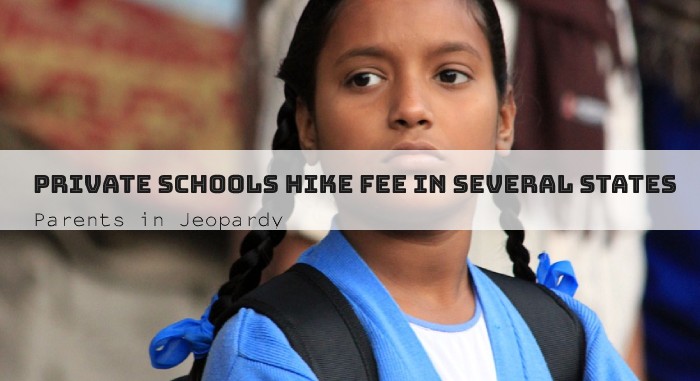 New Delhi, 26 April 2022 – Private schools across several states in India have hiked their fees, causing a spur of uproar by parents. In some states, the fee hike is as high as 30%, while some have put a maximum cap of 10% on the hike. Due to the long-term financial strain caused by the COVID-19 pandemic, parents state that they are not in a position to afford unregulated fee hikes and are protesting against the same.

There has been an uproar against the fee increase in states like Uttar Pradesh, Delhi, Punjab, Assam, among others. The Punjab government has called up a probe against a large number of schools over the issue of fee hike. The Delhi government too has promised to look into the issue and provide a solution.

On the other hand, schools in Assam have seen a fee hike ranging from 5% to 8%, and the Uttar Pradesh government has also allowed private schools to increase their fees by up to a maximum of 10% – leaving parents in a tight spot.

Parents in Delhi have been alleging that a majority of private schools have increased the school fee, including transportation fees, by up to 30% citing the post-pandemic inflation as the reason.

The Delhi Parents Association has been protesting against the fee hike and has demanded the AAP government’s intervention in the same. The parents’ association has also stated that it will continue to protest till “the illegal and arbitrary fees collected from them are refunded”.

Taking note of the issue, Education Minister Manish Sisodia has noted that action will be taken against private schools who have increased fees without permission. He further stated that the government checks the bank accounts of private schools and that “after checking accounts of some schools, we have understood that they don’t have money. So, we have allowed very few schools to increase fees in a limited way… by 2% in some and 3% in others. Apart from this, if any school is increasing fees according to their wishes and if we get complaints from parents, we will conduct an inquiry and an audit. Action will be taken against them.”

The Punjab government has earlier put a ban on private schools, restricting all schools across the state to increase the fee. However, several parents complained to the government that schools in numerous cities of Punjab had increased the fee.

Following the incident, the Punjab government has ordered a probe against 720 private schools for raising fees despite government orders and stated that if these schools are found guilty, they will face severe consequences.

Private schools across Uttar Pradesh are now allowed to increase the fees for the academic session 2022-23. As per the government, private schools can increase their fees from the academic session 2022-23. However, the government also noted that if any student, or guardian/parent-teacher association, is aggrieved with the fee hike, they can submit a complaint to the District Fee Regulatory Committee under section 8 of the Act 2018.

Anil Agarwal, President of Unaided Private School Association of UP noted in this regard, “All private schools in Uttar Pradesh will increase their class-wise monthly composite fee by up to 10% maximum in the current session 2022-23. This increase will be based on the fee being charged in the session 2020. For example, if the fee for Class 1 in a school was ₹1000 in the session 2020, then it will increase to a maximum of ₹1100.”

Parents in Assam are protesting over the fact that private schools in the state have hiked their fees by 3% to 8% citing post-pandemic inflation as the reason.

This has all been possible due to a glitch in the state government’s fee portal. As per government norms, all private schools have to apply to the FRC portal – www.feeregulatoryassam.com – to get their fee structure approved. Due to technical issues, the government could not regulate the fee and parents had to pay unapproved fees to get their children admitted. This led to an unregulated fee hike from 3% to 8% in the state.

Why are private schools increasing their fees?

Schools are increasing their fees citing the post-pandemic inflation as the reason for the hike.

How much fees have been hiked by private schools?

Has the government interfered in the fee hike issue?

The Punjab government has called up a probe on 720 schools for unregulated hiking of fees. The Delhi government has also stated that it will look into the issue and take action if necessary.