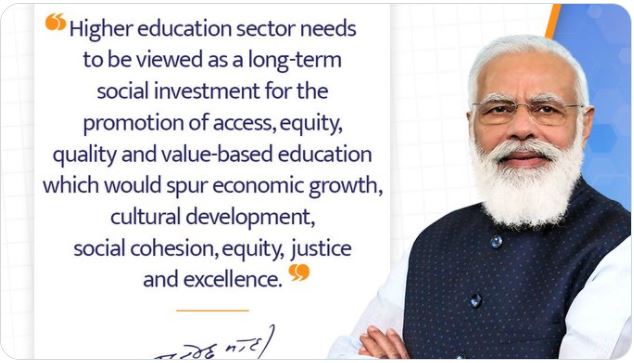 New Delhi, 8 July 2021 – Dharmendra Pradhan has been elected as India’s new Minister of Education, Skill Development & Entrepreneurship. He has replaced Dr. Ramesh Pokhriyal Nishank, who resigned from his post on Wednesday afternoon, citing health reasons. Pokhriyal had taken charge as the HRD (renamed as Ministry of Education) in May 2019.

In the reshuffling of Prime Minister Narendra Modi’s cabinet for the second term, the Education Ministry has also got three new Ministers of State for Education – Annapurna Devi, Subhas Sarkar, and Rajkumar Ranjan Singh.

Dharmendra Pradhan will be handling the affairs of school education and higher education, while retaining his existing portfolio of skill development. The former Oil and Gas Minister is now expected to address several immediate concerns after taking on his new role. These include NEET 2021 and the strategic implementation of the New Education Policy.

1. NEET 2021 – As his last task before resignation, former Education Minister Ramesh Pokhriyal had announced the postponed dates for the third and fourth session of JEE Main 2021 on 6 July 2021. Since there was no mention about the NEET UG 2021 examination during this announcement, aspirants are expecting the Dharmendra Pradhan to take up the task of providing clarity on this issue on priority.

Recently, a fake public notice regarding NEET 2021 was doing the rounds. As per the fake notice, NEET 2021 was to be held on 5 September. However, the National Testing Agency came forward on Wednesday to warn the NEET aspirants against such fake notices. In an official notice, the NTA clarified – “The fake/unauthorised public notice has been viewed seriously by the NTA, as it is being circulated by some unscrupulous elements with a motive to misguide the aspiring candidates/parents/guardians/public at large.”

“The NTA is still in consultation with the concerned stakeholders for finalising a suitable date for the conduct of NEET (UG) – 2021, keeping in view the ongoing COVID-19 pandemic,” it added.

For any information related to NEET 2021, students are advised to check only the official websites – nta.ac.in and ntaneet.nic.in.

2. Digitization of Higher Education – Education Minister Dharmendra Pradhan, the newly-appointed Ministers of State of Education, along with Prime Minister Narendra Modi presided over a virtual meeting on July 08, 2021 at 11:00 AM which included more than 100 directors of centrally funded technical institutions like the IIT Bombay, IIT Madras, IIT Kanpur, and Indian Institute of Science Bangalore. During the meeting, Prime Minister Modi appreciated the improvement in the Gross Enrolment Ratio (GER) in higher education in the past few years, and emphasized that digitization of higher education can play a big role in increasing GER, and students will have easier access to good quality and affordable education.

The PM also lauded the various initiatives taken by the institutions to increase digitization such as that of online bachelor and master degree programmes.

3. Focus on Technology and R&D in Education – During the same virtual meeting, the PM added that technological, R&D institutions will play a major role in the upcoming decade, which is also being called as “India’s Techade”.

4. AI-driven Education – The Prime Minister also highlighted that it is important there is good quality infrastructure in higher educational institutions to ensure that products associated with artificial intelligence, smart wearables, augmented reality systems, and digital assistants reach the common man. He emphasized the need for focus on affordable, personalized, and AI-driven education.

With the introduction of #NEP, the Indian education system has taken a giant leap in fostering an environment for a future-ready 21st century India. We are committed to make students and youth the primary stakeholders in propelling India towards an equitable knowledge society.

Pradhan stressed on the need for “integrating education with employment, and making it more inclusive, holistic, multi-disciplinary, and at par with global standards”

6. Other changes expected – As per recent reports, changes could be expected in Digital India and e-learning. Focus on education of girl child, conduct of Navodaya Vidyalayas and Kendriya Vidyalayas, and centrally sponsored scholarships is also expected to see an increase with the appointment of the new ministers.