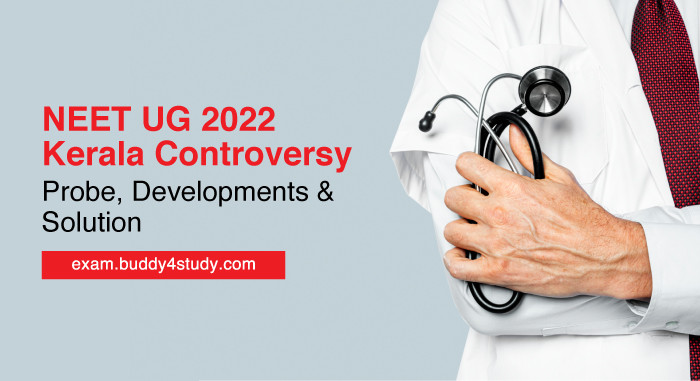 New Delhi, 20 July 2022- NEET UG 2022 Kerala Controversy – Reports regarding the NEET UG 2022 frisking incident have begun to surface from examination centers situated across multiple locations within Kerala. Three such incidents have been reported from the Kollam district in Kerala, where female candidates were asked to remove their innerwears before they were allowed to enter the examination hall.

This was done because the students were allegedly violating the NTA guidelines of not carrying metallic items into the examination hall, as their innerwear had metallic hooks. As a result of this, the Kerala State Government and various organizations such as NCW (National Commission for Women) and NTA (National Testing Agency), which conducts the NEET examinations across India, have swung into action.

NCW has asked NTA to conduct a probe into the matter and NTA has also formed a fact-finding team to investigate the incident. Five women staff accused of being involved in the NEET UG 2022 frisking incident have also been arrested. Experts are of the opinion that the lack of clarity in the guidelines provided by NTA, especially those related to the dress code, are leading to such incidents being repeated.

As similar frisking incidents from many centers across the Kollam district in Kerala were reported, the parents of the aggrieved female candidates filed FIRs. The matter also caught the media’s attention.

The National Commission for Women (NCW) has directed the Kerala Director General of Police (DGP) to take action in this regard. It has also ordered the National Testing Agency (NTA), which conducts the NEET examinations, to launch a probe into the matter.

Accordingly, NTA has formed a fact-finding team, which has left for Kerala to carry out investigations. Moreover, five women staff who are accused of being involved in the incident have been arrested.

The NTA guidelines on the dress code for NEET UG 2022, which can be viewed on the official website, appear to be quite vague in this regard.

The list of barred items includes “Any metallic things that could be used for unfair means, for hiding communication devices like camera, Bluetooth device, etc.”.

These guidelines are quite vague, open to interpretation, and might mean anything ranging from metallic buttons to metallic support equipment (such as crutches, belts or walking sticks for differently abled candidates). This vagueness, as per some experts, might be responsible for the repetition of incidents like the NEET 2022 frisking incident in Kerala.

NEET UG 2022 Kerala Controversy – What are Some Possible Solutions?

In order to avoid the repetition of such incidents as the frisking incident during the NEET UG examinations 2022 in Kerala, here are some solutions that experts believe can be implemented:

What is the NEET UG 2022 Kerala controversy?

Across multiple centers in Kerala’s Kollam district, reports have surfaced that female candidates were asked to remove their innerwears, which contained metallic hooks by the frisking staff, as it allegedly violated the NTA-prescribed dress code for NEET.

Who conducts the NEET examination?

NEET is conducted by the National Testing Agency (NTA) all over India.

Have such NEET controversies happened before too?

Yes! In 2017, the frisking staff at a center in Kerala were found guilty of asking female candidates to remove their underwear before they were allowed to take their NEET examinations. The investigation reported that ‘overzealous authorities’ were behind the lapse.

What are the solutions to stop the repetition of such incidents?

Experts recommend that there should be greater clarity in the NTA guidelines for dress codes to be observed in examinations like NEET. They have also recommended that the frisking staff should be trained to handle such sensitive situations.