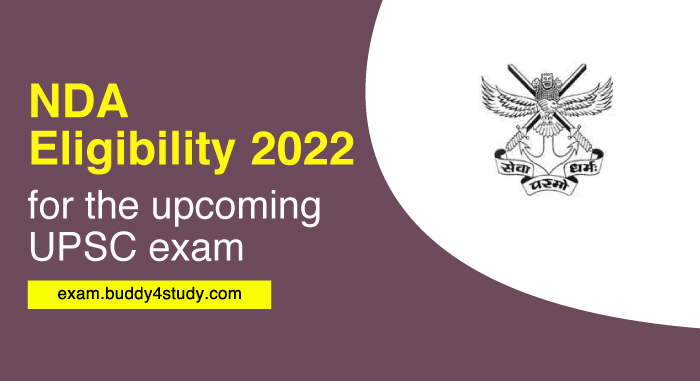 Union Public Service Commission (UPSC) conducts the NDA exam to recruit young candidates into the Indian Army, Navy and Airforce. UPSC prescribes the NDA eligibility criteria for the candidates to get selected for the desired post(s). Unmarried male candidates who have qualified for the 10+2 level exam (or an equivalent exam) meet the basic qualification criteria for the NDA exam. However, the overall NDA eligibility criteria include age, nationality, and physical standards, apart from marital status, gender or educational qualification.

Candidates can know the criteria for all the variables covered under the NDA eligibility 2022 here.

The nationality criteria for the NDA examination are mentioned below. An aspirant applying for NDA must be:

Candidates who are foreign nationals have to produce a certificate issued by the Government of India stating their eligibility for participation in the NDA exam 2022.

Note – Nepali candidates who belong to the Gorkha community do not need to present the certificate of eligibility issued by the Government of India.

UPSC has defined the upper age and lower age limit for NDA recruitment. The table below describes the date of birth (DOB) based explanation of the age restrictions in NDA I and NDA II

Candidates can check their marital status and gender eligibility for taking the UPSC NDA here.

All the candidates selected through the NDA exam will not be allowed to get married during the training period. However, marriage after the training period will be permissible. A candidate who marries during training shall be discharged and will be liable to refund all expenditures incurred on him by the Government.

Candidates who are not Educationally Fit to Apply for NDA

Read the official note mentioned below regarding the candidates appearing in the 12th class or waiting for their results:

AGE-SPECIFIC HEIGHT AND WEIGHT REQUIREMENTS FOR ARMY AND AIR FORCE

The chest must be well developed. The expanded chest size should not be less than 81 cms. Any kind of maldevelopment or impairment of the function of the bones or joint can lead a candidate towards disqualification.

Note: Relaxation to an extent may be provided to the candidates with heavy bones and broad built as per the discretion of physical examination team

In case the examining body detects any spinal conditions radiologically during the medical exam, the candidature may get rejected for the Indian Air Force service –

In case the examining body detects any of the following conditions during the X-ray examination, the candidature may get rejected for the Indian Armed Forces service –

Candidates may have some fairly common health issues. But before the NDA medical examination, they should get rid of such ailments and restore good health.

The officials do not prefer the candidates having the following minor conditions:

✔️ What is the mandatory education qualification set by UPSC as the NDA eligibility?

Candidates must have passed the class 12th examination (or an equivalent exam) in any discipline from a recognized central/state board or university to apply for NDA 2022. Additionally, the candidates must have studied Physics and Mathematics as core subjects at 10+2 level for recruitment in Air Force and Naval wings.

✔️ I was barred in the defence services training session. Am I eligible for NDA exam 2022?

No. Candidates who have earlier been barred on disciplinary grounds from any of the defence service training sessions will be marked ineligible to take the NDA examination.

✔️ Is there any maximum number of attempts as per the NDA eligibility criteria?

No. You can give the NDA exam as many times as you want if you fulfill the NDA eligibility criteria of that respective year.

✔️ Is there any minimum score requirement in the qualifying education as per the NDA eligibility criteria?

✔️ Will marrying during the training period affect my final posting?

Yes. Only the unmarried male candidates are eligible for NDA. Defence trainees recruited through NDA need to maintain their marital status as unmarried even during the three years of the training period. If a candidate is found married, his candidature will be rejected with immediate effect.

✔️ I have undergone a hernia surgery recently. Do I fulfill the NDA eligibility criteria 2022?

A surgery to treat unoperated hernia makes a candidate unfit for the selection. Also, candidates who have gone through any kind of surgery in the past 12 months are also ineligible as per the medical standards set for NDA.