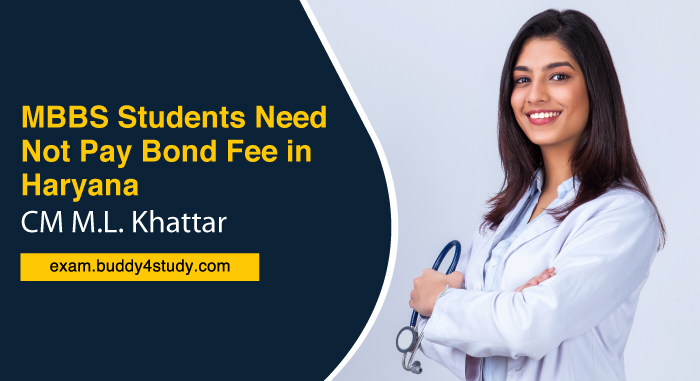 04 November, 2022, New Delhi – The Chief Minister of Haryana, Manohar Lal Khattar, recently announced that instead of paying the bond amount, MBBS students in Haryana will now have to enter into a bond-cum-loan agreement equal to the bond amount with their government medical college and a bank.

This means that no student will have to pay any sort of bond amount to the government medical colleges during admissions to MBBS courses. Now, the government will finance the bond amount for the pass-out medical students who wish to join the service of the state government and serve for a specified period of seven years.

This decision was taken following protests by MBBS (Bachelor of Medicine, Bachelor of Surgery) students in Haryana Government medical colleges against the state government’s bond policy.

Note: The bond fee payable earlier to this decision by the CM was around Rs. 10 lakh.

After a review meeting of the implementation of the state government’s policy regarding encouraging the doctors to join government service after completing their MBBS, the decision to revoke the bond fee was undertaken.

This will be in the favor of MBBS students. Now, students will only have to sign a bond-cum-loan agreement equal to the bond amount with their government medical college and a concerned bank.

“The State Government will pay the bond amount if the MBBS/MD pass-out students choose to work for the State Government for a set term of seven years. Additionally, the candidates who do not choose to work for the Haryana Government would be responsible for covering the aforementioned sum on their own. Additionally, the corresponding bachelor’s degrees for these students won’t be granted until all financial obligations have been paid”, said the Chief Minister.

According to the CM, the government has taken this action to allow students who have completed an MBBS to work in government hospitals and assist the populace of the state.

The state government, according to the CM, is making progress toward its goal of offering health facilities to everyone, particularly the poor.

He noted, “The number of medical, dental, homeopathic, and nursing colleges has expanded during our leadership. Only 7 medical colleges and 700 MBBS seats were available in the state in 2014. Six new colleges have been established under our administration, bringing the total number of MBBS seats to 1735.”

The CM also stated that every district will have a medical college and that 3000 students would be accepted to MBBS programmes as soon as the construction of these medical colleges was finished.

In order to address the issue of physician shortage in the state, Khattar said that the government has increased MBBS seats and will do so in the future as well. One doctor for every 1,000 people is the goal set by the state government.

MBBS Bond in Haryana – Reaction of Protesters to the Policy

The MBBS students protesting the bond cost are not happy with this alleviation, however, and claim that the issue of a guaranteed government position for every MBBS graduate still exists.

The state government is not required or required by the policy (that went into effect in 2020) to hire all MBBS graduates. To join the state medical services, candidates must follow the established procedure. This would put further strain on those who are unable to obtain a government position because they will be required to pay the bond sum on their own, according to one MBBS student.

Another student asserted that the government’s purported “relief” was meaningless without a job guarantee provided to every MBBS graduate. “The majority of students want to work for the government, thus, the government ought to promise them employment once they have finished their programme”, he continued.

In the meantime, the Convener of the Jan Swastya Abhiyan and Retired Professor from PGIMS-Rohtak, Dr. RS Dahiya, has criticized the government’s approach. He said that every year, 710 MBBS students graduated from government colleges in the state, and that historical experience had shown that not all of them could be accommodated in the government system. The government’s judgment is nothing more than an eyewash in this case because the students will be responsible for paying the bond amount on their own, he continued.

Note: Read the full information on the Haryana Government Gazette by clicking here

What was the bond amount that was payable by MBBS students in Haryana earlier?

Ans. The bond amount payable by the students earlier was around Rs. 10 lakh.

What is the criteria of the payment of the MBBS bond amount in Haryana?

Ans. The Haryana State Government will pay the bond amount only if the MBBS/MD pass-out students choose to work for the state government for a set term of seven years.

What is the total number of medical seats in Haryana?

Ans. The total number of medical seats in Haryana is 1735. The state has been able to reach these numbers by the establishment of six new medical colleges after the year 2014.