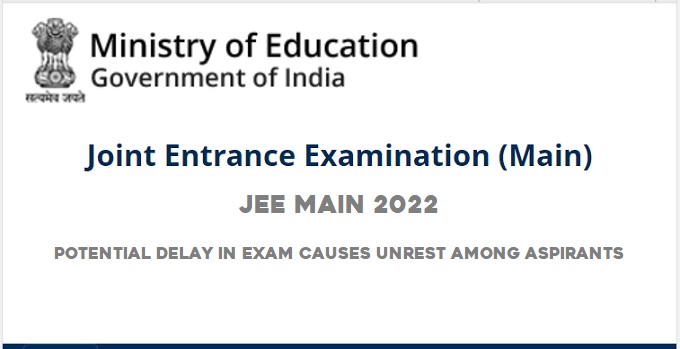 New Delhi, 30 December 2021 – Aspirants across the country are worried over a potential delay in the Joint Entrance Examinations (JEE) Main 2022 examination. Last year, the NTA had decided to increase the attempt limit (from 2021 onwards) of JEE Main. This year too, there will be four attempts for the JEE main exam – February, March, April, and May. However, due to the upcoming elections in various states and the rise in Omicron cases in India, speculations are rife that the first session of JEE – that was scheduled to be held in February 2022 – will be held in March.

There is no official update whatsoever on the issue of there being a delay in the February session. Due to this, concerned JEE aspirants across the nation have taken to the social media platform Twitter to show their displeasure and ask about the schedule of the February session of the examination. The National Testing Agency (NTA) and the government are being criticised as they remain tight-lipped and do not provide any clarification on the rumours. Students demand that NTA release an official announcement on the official website to curb this nation-wide curiosity.

Aspirants are showing their displeasure through various Twitter posts and demanding NTA to provide information regarding the exam. Some of the students’ demands include: 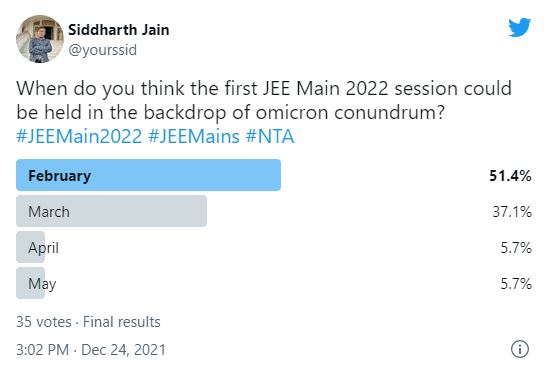 Students are also protesting against the decision to offer four attempts in JEE Main, as some believe that offering two attempts in 2022 will be more beneficial to aspirants.

Others are demanding the government to remove the 75% criteria to be eligible for JEE Main, which requires students to have a minimum of 75% marks in Class 12. These students note that they faced study-related difficulties due to the pandemic, and hence, the 75% criteria must be revised or entirely removed.

The rumors regarding the exam were fuelled when an unnamed internal officer from the Ministry of Education (MoE) noted that amid the pending elections in various states, it might be decided to push the February session of JEE Main to March. The source, however, did not share anything regarding the date of the examination. This speculative leak has caused unrest among JEE aspirants across the country.