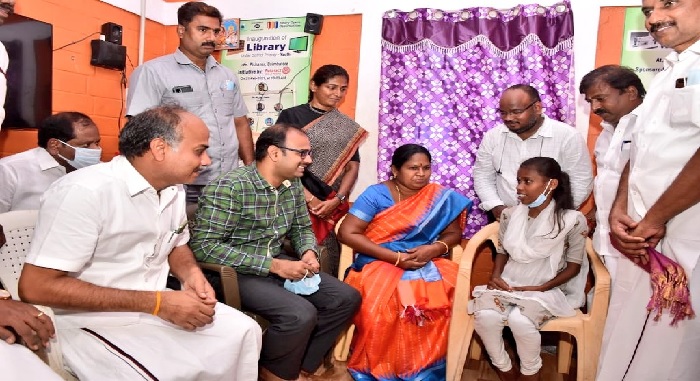 New Delhi, 16 November 2021 – 20-year-old Sangavi Muniyappan from Nanjappanur village in Coimbatore district has cleared the NEET 2021 exam. She has created history by becoming the first tribal student from her village to clear this competitive exam. Belonging to the Malasar tribal community, she was also the first girl in her village to complete Class 12. She also made headlines last year for her long-drawn struggle to receive a Scheduled Tribe (ST) certificate, which she later received after the District Collector’s intervention.

Kayalvizhi Selvaraj, the MLA from Dharapuram Constituency DMK and Minister for Adi Dravidar and Tribal Welfare has congratulated Sangavi on achieving more marks than the NEET’s ST cut off.

Note: Malasars are a designated Scheduled Tribe in Tamil Nadu and Kerala.

The Story of Sangavi, The First Tribal Student From Nanjappanur Village to Clear NEET

The educational journey of Sangavi had been a tough one. She cracked the exam despite the economic suffering in her family. Besides, her mother has been battling an eye disease. Sangavi’s father, unfortunately, passed away due to cardiac arrest.

Despite the unfortunate events, hardships, and the lack of infrastructure, Sangavi gave her best in school, aspiring to become a doctor. She ended up scoring 202 out of a total of 720 marks in NEET 2021. Since the NEET cut-off for ST students is 108-137, Sangavi’s performance is praise-worthy.

However, this wasn’t Sangavi’s first NEET attempt. She had also appeared for the NEET exam in 2018 but missed her chance by 6 marks.

On asking about her previous and current NEET attempts alongside her hardship to attain it, Sangavi said, “Coaching and syllabus were not my concerns. I appeared for the NEET exam in 2018 after I completed my HSC in Pichanur Government Higher Secondary School. But I lost the chance to become a doctor by just six marks. Later, I joined Narayana Guru Polytechnic college for a diploma. Without a community certificate, I couldn’t get all the facilities the state assured for the tribal students under the ST reservation. It was hard for me to leave the college within a week. I applied for a community certificate right after I finished my SSLC.”

Sangavi’s Fight for Her Community Certificate

Sangavi and her family struggled as they never had a caste certificate. The absence of an ST certificate cost her 2 additional years as she narrowly missed the ST cut-off by a few points.

Without the caste certificate, things were more difficult for her compared to other ST students. The local revenue officials informed Sangavi’s family that they could not establish Sangavi’s connection to the Malasar tribe, which is a designated Scheduled Tribe as both her parents did not have caste certificates.

However, things took a turn when an NGO worker, Siva, came across her struggle to obtain the community certificate.

He shot a video of the village, portraying the lack of basic necessities like drinking water, street lights, and roads. The video soon went viral. Finally, the district collector intervened and issued her a certificate. However, her struggles did not end there.

Sangavi’s father’s death and COVID-19 acted as a  boulder in front of her dreams. Siva, who took over her guardianship shortly after, enrolled her for NEET coaching. However, due to the pandemic, she could not continue the classes.

Sangavi did not own any gadgets to take up online classes. On top of it, her village didn’t have adequate network facilities. With the help of Siva, she managed to attend physical coaching for two months and appeared for the exam, scoring 202 marks out of a total of 720 marks, which was above the NEET 2021 ST cut off.

A Ray of Hope for Nanjappanur Village

Sangavi’s mother Vasanthamani said that she is very proud of her daughter for clearing the medical entrance exam. She said that the nearest healthcare centre is far away from their settlement in Madukkarai. Lack of doctors and basic medical help has caused many from their community to succumb to illness or injuries before they could receive medical treatment. She is happy that Sangavi is studying medicine.

Echoing her mother’s view, a proud Sangavi said, “I always wanted to be a doctor from when I was a child because I have seen my people struggle. If I become a doctor, I want to serve the people in my village or those in other villages who are struggling due to the lack of medical facilities. That’s why I dreamt of becoming a doctor.”

“There are people in my village who do not send their children to school. Instead, they send them to daily wage work. My father never wanted me to be in that place. He encouraged me to grow in life, helping people in need. This made me take this path so that other children would also get inspired and move forward. I’m very proud to have come from such a village and I hope that more children from here will follow my path” she added.

In her battle to clear the exam, Sangavi had got help and support from several people across the state. After cracking the NEET 2021 exam, she has appealed to fellow aspirants not to end their lives by committing suicide. As per the reports, Sangavi has a high chance of securing a medical seat under the 7.5% reservation of the Tamil Nadu government.