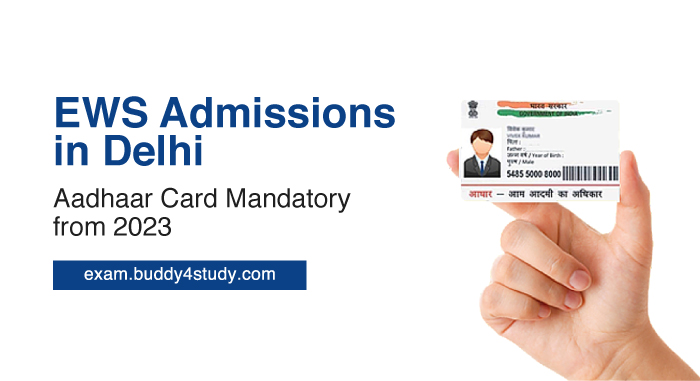 The rule will come into effect from the next academic year, that is, from 2023. As per the DoE, this rule has been implemented to bring fairness and transparency into the admission process pertaining to private schools in Delhi under the EWS, DG and CWSN categories.

Addressing concerns regarding privacy and data safety, the DoE has clarified that the information collected from the Aadhar card at the time of registration of the application form will be only minimal. Details contained therein, including personal details like biometrics, will be not stored or shared with any other agency.

Note: For other policy changes related to EWS admissions in Delhi, see our previous article.

What is the RTE Act?

The Right of Children to Free and Compulsory Education Act 2009, also known as the RTE Act, seeks to provide free and compulsory education to all children aged between 6 and 14 years in India. It has provisions such as offering infrastructural support to schools and students, promoting inclusivity in schools, prohibiting discrimination, regulating the quality of teachers and teaching, etc.

Are private schools covered by the RTE Act?

Yes. This act states that all private and unaided recognized schools, except the schools run by minorities, are obliged to admit students belonging to weaker sections, disadvantaged groups, as well as children with special needs in up to 25 percent of their total strength at entry-level classes.

What are entry-level classes for EWS admissions?

Entry-level classes mean classes including lower kindergarten (LKG), upper kindergarten (UKG) and Class 1, or from whichever of these three classes teaching at a school begins.

Are preschool and nursery classes also eligible for EWS admissions in Delhi?

No. Preschool classes and nursery classes are not eligible for EWS, DG, and CWSN admissions.

Yes. As per the new orders issued by the DoE (Directorate of Education), Delhi Government, Aadhaar card has been made mandatory for admission to private schools in Delhi under EWS, DG, and CWSN categories, from the academic session 2023-24.

Why has the Aadhaar card become mandatory for EWS admissions in Delhi private schools?

According to the Directorate of Education (DoE), many applicants used to fill up the application form by hiding or changing personal details to increase the probability of their selection in the computerized lottery. Some applicants even got admissions to multiple schools because of this manipulation, while many deserving students stayed deprived. The policy has been changed to stop these malpractices.

Is it safe to share Aadhaar details with DoE (Delhi)?

Yes. DoE has clarified that the information collected from the Aadhar card at the time of registration of the application form will be only minimal. Details contained therein, including personal details like biometrics, will be not stored or shared with any other agency. Therefore, it is safe to share Aadhaar data with DoE.