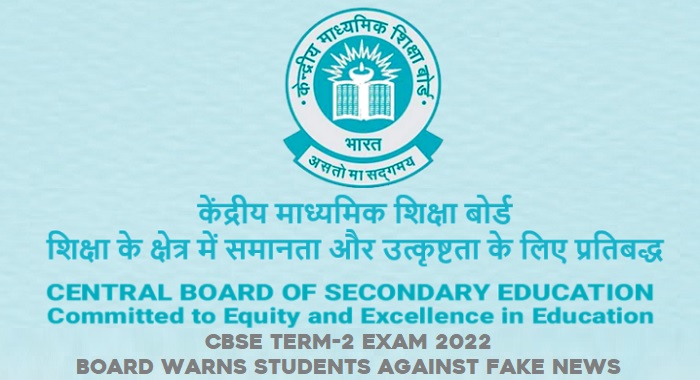 New Delhi, 5 December 2022 – The Central Board of Secondary Education (CBSE) has recently released a notification for students appearing for CBSE Term-2 board exam 2022, warning them against the fake exam pattern news being circulated on online media platforms. The board has urged the students to not believe in the news that says there will be a change in the pattern for Term-2 exams. It further stated that any news that comes from any source other than CBSE itself is misleading and incorrect and students should only consult the official website – cbse.gov.in – for authentic news.

In a public advisory, the board has stated that “It has been noticed that a few online media platforms are circulating incorrect information and confusing audiences, using expressions such as ‘Breaking News’ about major exam pattern changes in class 10 and 12, Term-2 Board exams … It is clarified in the interest of students that the Board had [already] announced the changes in exam pattern (mentioned in circular number 51, dated 5th July 2021). Term-1 exams have already been completed and the format of exams for Term-2 is also mentioned in the same circular.”

Note: The board also stated that Term-2 board exam 2022 dates have not been released yet and will be released soon on the official website.

The impact was such that the board had to clarify its stand on exam pattern change. It released the public advisory, stating that there are no changes in the exam pattern and that students must only believe the information they receive from CBSE’s official website.

Note: As per CBSE, any news that does not corroborate with the official website is misleading, and must not be believed.