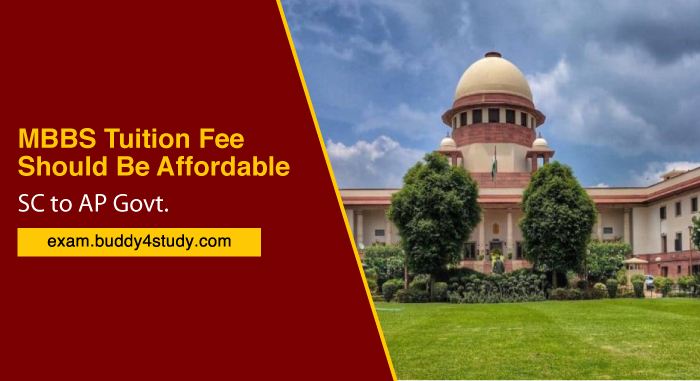 New Delhi, November 9, 2022: SC Verdict MBBS Fees in Andhra Pradesh – The Supreme Court has terminated the Andhra Pradesh government’s decision to increase tuition fees in medical colleges to INR 24 lakh per year. The court said that this is seven times more than the fee that was fixed earlier and such a huge hike in fees was not acceptable. The bench also reminded  the Andhra Pradesh government that education is not a business to make profit. “The tuition fee must always be affordable,” the bench remarked.

The top court’s observation came as it rejected a plea that was filed by a certain college against the earlier Andhra Pradesh High Court order. As per this order, the government’s decision to hike the tuition fee of MBBS students was completely incorrect.

The benefits expected for the medical students as a result of this order are as follows:

Why is the fee of MBBS so high in India?

The low number of seats in India makes medical studies very difficult for students who come from middle income groups. Each year, there are 14 lakh applications for NEET, while there are just 90,000 MBBS seats. A private medical course in India costs around INR 25 lakh per year, which can very well go over INR 1 crore. So, fee is a very crucial factor for studying MBBS in India. The recent SC Verdict MBBS Fees in Andhra Pradesh is a welcome move and is something medical aspirants must check out.

What are the best and affordable medical colleges in India?

What is the AFRC?

The Andhra Pradesh Admission & Fee Regulatory Committee (AFRC) supervises all the admissions made by private and professional educational institutions. Its job is to make sure that the admissions are carried out in a transparent and fair way – without any exploitation. If the AFRC observes that admissions have not been not conducted in a proper professional way, and are not according to the applicable admission rules, then in such cases it holds the power to cancel such admissions and release new orders; as the situation may demand. In the recent SC Verdict MBBS Fees in Andhra Pradesh case, the consent of AFRC was not sought.