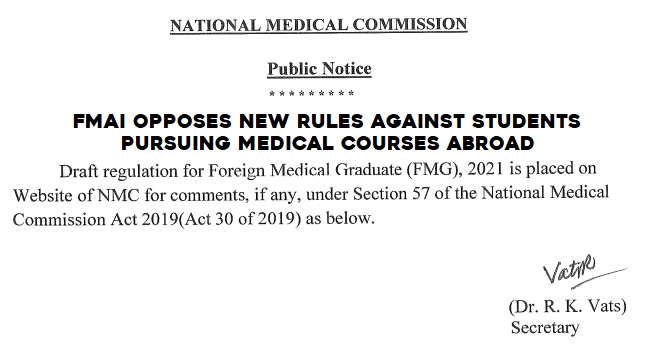 New Delhi, 9 December 2021 – The Foreign Medical Association of India (FMAI) held a press conference on Tuesday (7 December) to protest against new regulations implemented by the National Medical Commission (NMC). These regulations, imposed on Indian students who are pursuing medical education from abroad, have created a spur of outrage.

As per NMC’s new regulations drafted in May 2021, Indian students have to adhere to a long list of guidelines if they want to pursue foriegn medical education and start a practice in India. The FMAI believes these guidelines to be unfair to students and states that these will not allow middle class students to become doctors.

Dr. Sudarshan Gherde, the president of the FMAI, noted in this regard, “We are protesting and the NMC should immediately reverse this decision. This rule is likely to be a major obstacle. It’s a kind of a conspiracy with their future. The new rules will affect around 10,000 students seeking medical education abroad every year. It is a conspiracy to prevent ordinary students from becoming doctors …The NMC should not impose such oppressive rules on world-class education.”

New NMC Regulations – At a Glance

As per the new regulations, any student pursuing medical education outside of India has to:

These regulations implemented by the NMC are being criticised for being too rigid. The FMAI has demanded that these rules be reversed, as these will majorly affect middle class Indian students pursuing affordable education outside of India.

Earlier, there were no such regulations and Indian students could easily pursue foregin medical education. However, now, these rules are causing issues for foreign students. As per FMAI, if new regulations are not terminated, it will cause major problems for students, as they won’t have any other option but to stay in India for studies or face strict regulations while studying abroad.